Have you ever said to someone that you’re planning to visit a particular place only to have them say, “It’s not worth it. There’s not much to see. Don’t bother.”? Then you have to decide whether to take this unsolicited advice or ignore it and see for yourself.

One of the places we really wanted to see while we were in Brussels was Waterloo, site of the famous battle between the Duke of Wellington and Napoleon Bonaparte. We’d been told there wasn’t much there and it wasn’t worth making the trip but we decided to disregard this advice and see the battlefield for ourselves. After all, we weren’t going to be in Brussels again anytime soon and it was easy enough to get there on a local train.

The journey from Brussels Central Station took about 45 minutes. When we arrived at the station at Waterloo we were the only ones who left the train, and the station and surrounding streets were deserted. The tourist information office in town was a 15 minute walk from the station and we ambled along, passing local homes, parks and a school, but still without meeting a single soul. We were beginning to wonder if what we’d heard was right.

The Tourist Office is located in a charming 19th century building and it was there we needed to buy our tickets for all the battlefield attractions. 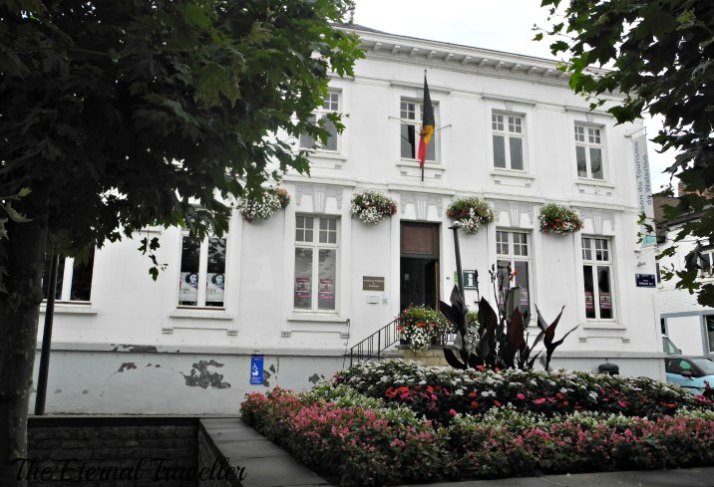 It was also there that we received the best advice of our whole five week trip. The lady in the office was so helpful and friendly. As soon as she heard we had come to Waterloo by train she gave us all the information we needed to get to the site by bus. She was able to sell us bus tickets as well as entry tickets, told us where to wait, the number of each bus we needed and at which stop to get off. She also advised us to visit the Wellington Museum before going to the battlefield so that we didn’t have to come back into town.  By the time we left the office we were armed with all the information we needed to see everything and enjoy our day.

Our first stop was St Joseph’s Church of Waterloo, next door to the tourism office. 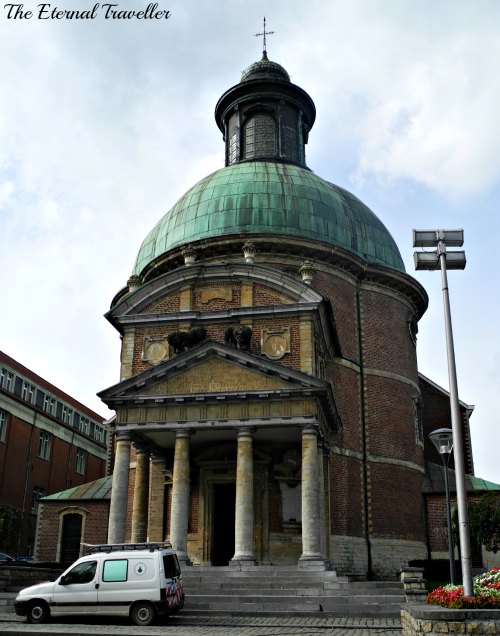 The oldest part of the church is the Chapel Royal, consecrated in 1690. In the Chapel there are 27 plaques dedicated to the fallen of the Battle of Waterloo. Some commemorate all those who fought here while others tell the sad story of just one soldier. 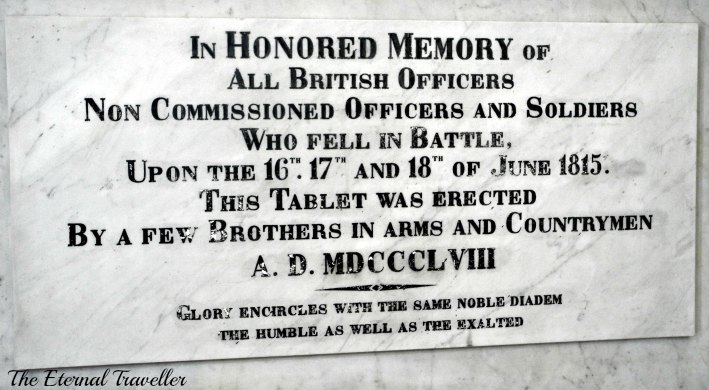 Across the road, in an 18th century coaching inn, is the Wellington Museum. 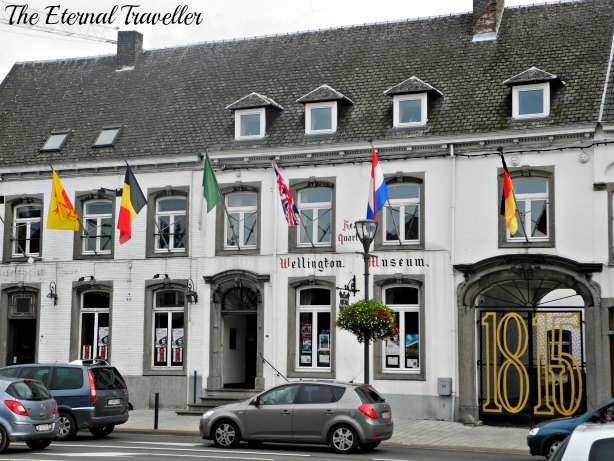 It was in this building that the Duke of Wellington set up his headquarters in the days before the battle and then wrote the report of his victory over Napoleon to the British government. The museum has rooms dedicated to both armies, with armour, swords and guns found on the battlefield, letters and dispatches and descriptions of the battle from both sides. The museum was just the right size – big enough to learn about the battle and what we were going to see on the battlefield without having to spend several hours there.

Next we found the bus stop we needed, and just as the tourism office lady had told us, along came the bus at exactly the right time. We told the driver we needed to get off at the battlefield stop and he was happy to help us and made sure we knew when to get off the bus and which direction we had to walk – more friendly advice we were happy to heed.

From the bus stop to the battlefield and the Butte du Lion we walked for another 15 minutes past farmland and country homes. In these surroundings the Butte du Lion or Lion’s Mound could easily be seen in the distance. This artificial hill was created on the orders of King William 1 of the Netherlands to commemorate all those who fell during the battle and in particular his son, the Prince of Orange, who was wounded by a musket ball. 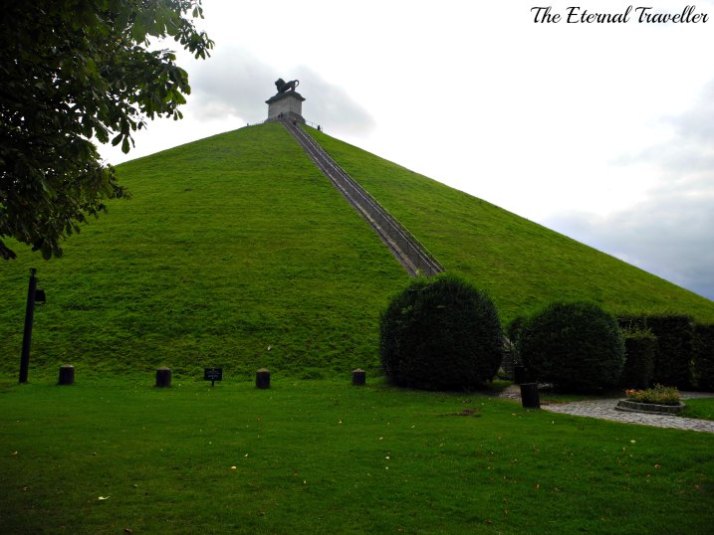 Near the Butte du Lion are two buildings which should not be missed. The first is the Visitors’ Centre where there is a wealth of information about the battle and those who took part in it. There are two films showing: “Waterloo, History of a Battle” which describes the life of a soldier using footage from a re-enactment in 2009, and excerpts from the 1970 movie “Waterloo”. 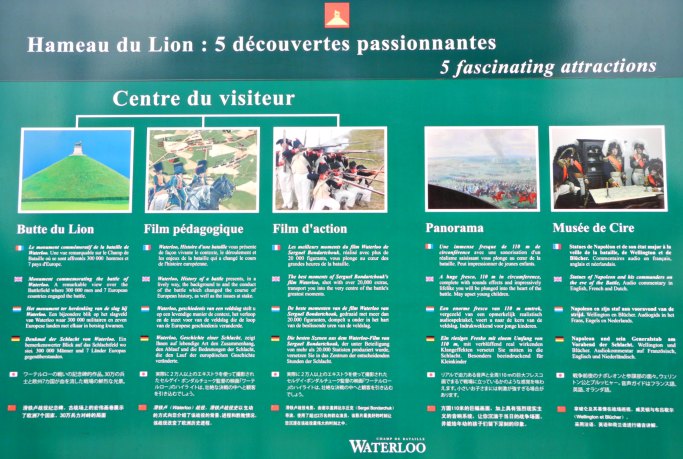 The second building houses the Panorama, a massive painted canvas 110 metres long and 12 metres high. It was created by Louis Dumoulin, a French Navy artist, and depicts the scene of the battle at 4 pm on 18 June, 1815 as the French troops began an unsuccessful attack on Wellington’s right flank.

The painting, accompanied by a sound track of cannon fire and the cries of the soldiers, is so realistic we felt like we were first hand witnesses to this moment in history.

To complete our battlefield experience we climbed the 226 steps to the top of the Butte du Lion and were able to finally see for ourselves the site of the Battle of Waterloo.  There are information boards around the fence so we could easily imagine the opposing sides as they bore down on each other. 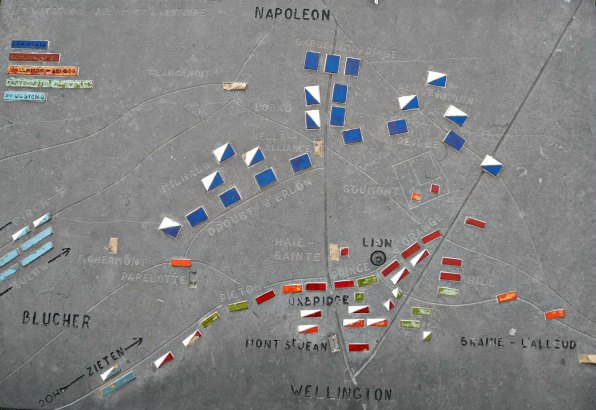 On top of the mound is the statue of a magnificent lion, its front paw resting on a globe of the world. The lion, heraldic emblem of the King of the Netherlands, symbolises peace, courage and victory.

Standing at the top of the Butte du Lion we celebrated a small victory of our own. We definitely made the right decision when we decided to ignore that advice and make the journey to this fascinating historical place.

So, when you’re given unsolicitied travel advice, do you take it or leave it?