The subway journey from our suburban Airbnb to Toronto’s CBD was not long but the difference in outlook was amazing. In High Park, a few people were out walking or enjoying the summer weather on their front verandahs.

At Union Station in the city centre, we were engulfed by a bustling crowd all intent on their own agenda. Unlike most of those people, on our first day in Toronto, we had no particular destination. We spent the day exploring.

From Union Station, we headed south along Bay Street towards Lake Ontario. At Harbour Square Park, we watched the ferries coming and going, taking passengers over the water to Toronto Islands.

Our plan to walk some way along the lake shore was dashed by the horrified look on the face of the lady in the Tourist Information van. “Oh no. Don’t go there,” she said with an expression which told us it wasn’t a good idea. She directed us back along Bay Street with a right turn onto Front Street, assuring us this was a safer and more interesting route. She was right! There was a lot to see along Front Street.

We didn’t have to read the name on this building; the images on the sides gave away its purpose. The Hockey Hall of Fame, first opened in 1943, moved to Front Street in 1993. The building dates from 1885 and was originally head office for the Bank of Montreal. 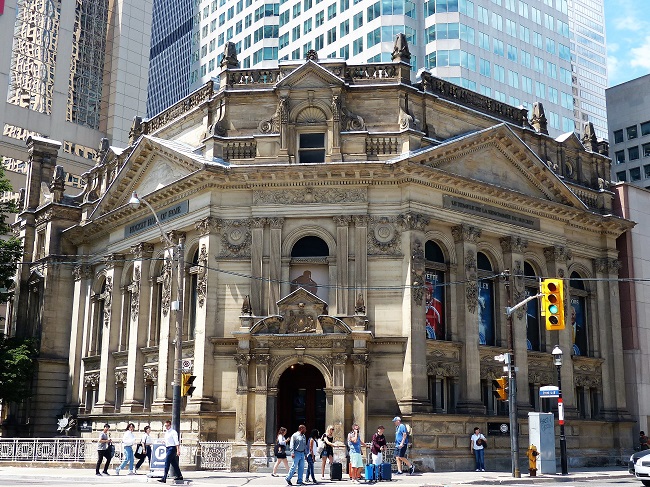 At Berczy Park we came across this fanciful fountain, where 27 dogs pay homage to a golden bone. Later we found out there is also one cat and wished we’d known to look for it. 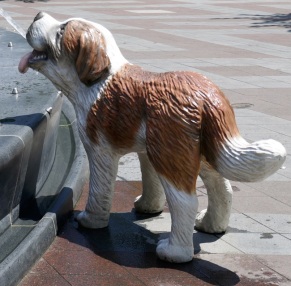 Just beyond Berczy Park is the original Flatiron building. Constructed in 1892, 10 years before its more famous cousin in New York, it was head office for the Gooderham and Worts Distillery for 60 years. Today,  commercial offices and a popular pub fill the building. The rear façade of the Flatiron is decorated with a large trompe l’oeil mural, a mirror image of the building opposite. 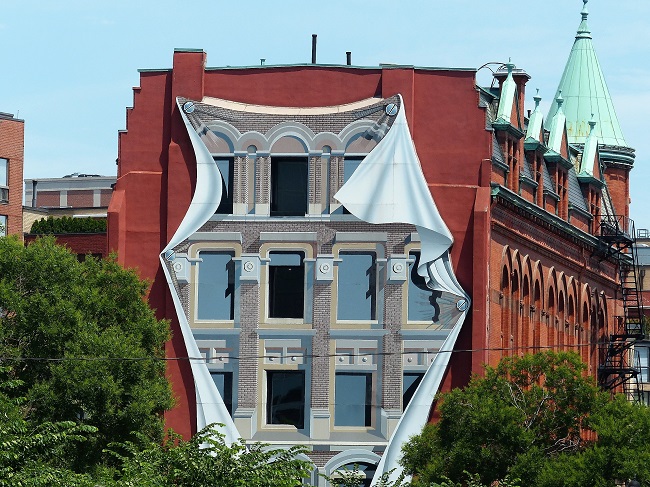 Further along Front Street is St Lawrence Market. Farmers have sold their fresh produce on this site since 1803 and the current building dates from 1848. Voted the world’s best food market by National Geographic in 2012, there are 120 speciality stores selling locally sourced fresh foods. The market is open every Tuesday to Saturday. 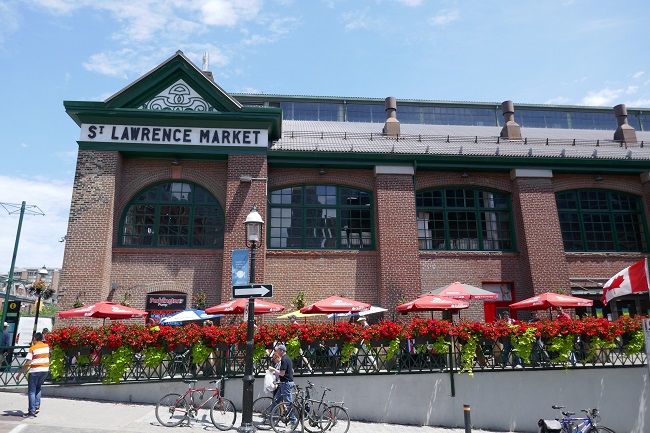 Our final stop in this direction was the historic Distillery District, founded by the same family who built the Flatiron building. The first building on the site was a windmill constructed in 1832. The Gooderham and Worts whiskey distillery soon followed and, by the 1860s, was the largest distillery in the world. Production continued until 1990. In 2001, the abandoned buildings were repurposed as boutique shops, restaurants and residences surrounded by gardens, sculptures and artworks. The district hosts a vibrant series of cultural events and festivals throughout the year. 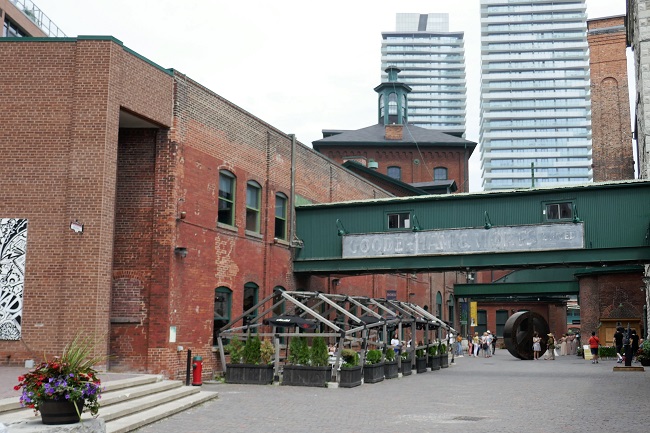 We retraced our steps along Front Street back to Union Station and continued on in the other direction to CN Tower. At 553.3 metres high, the communications and observation tower is visible from anywhere. Up close, its height is daunting and tourists braving the Edge Walk outside the observation deck look like tiny insects.

The Rogers Centre, a multi-purpose stadium and home of Toronto’s major league baseball team the Toronto Blue Jays, is nearby. This day the stadium was quiet but when a home game is played more than 30,000 people come to cheer on their team. 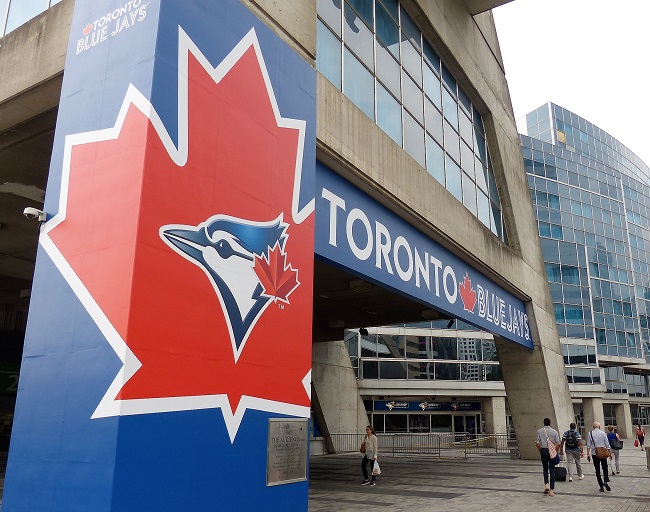 Leaving Front Street, we walked along York Street to our final destination. Nathan Philips Square, where the old and new City Halls sit side by side, is one of the most photographed parts of the city. Toronto City Council operated in the old City Hall from 1899 before moving across the forecourt to the new building in 1966.

Three Freedom Arches dedicated to Canadians who have fought for freedom for all span the reflecting pool. The TORONTO sign is flanked at one end by a maple leaf commemorating the 150th anniversary of Canadian Confederation and at the other by a traditional medicine wheel acknowledging First Nations peoples.

We were glad we talked to the lady in her information van at Harbour Square Park. She really did send us in the right direction!