In a quiet place far from Toronto’s bustling CBD, a little cemetery sits beside a mill pond. On an overcast day the pond mirrors its surroundings in a perfect reflection. 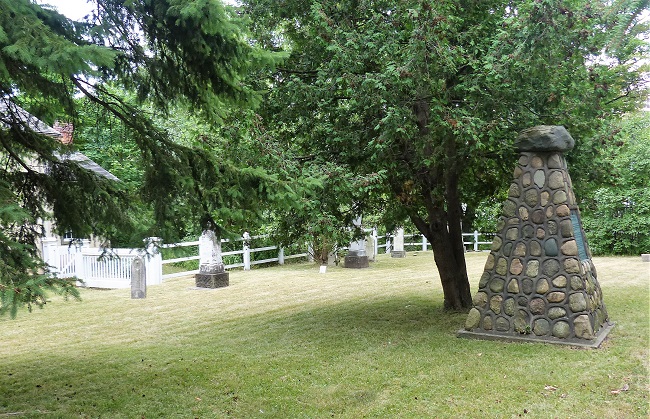 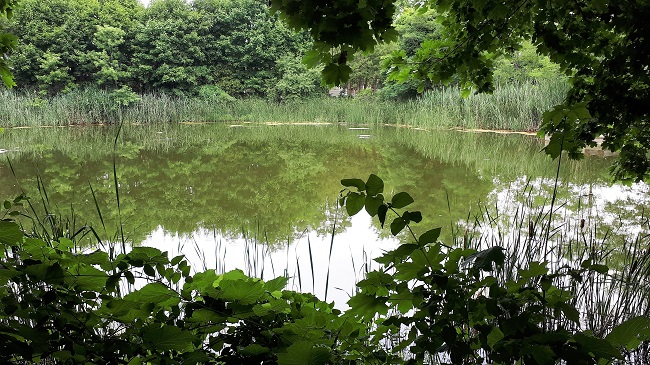 In the middle of the cemetery is a memorial to the Stong family, who migrated from Pennsylvania in 1800 to start a new life in Ontario. Daniel Stong and his wife Elizabeth both lie at rest here in the cemetery. 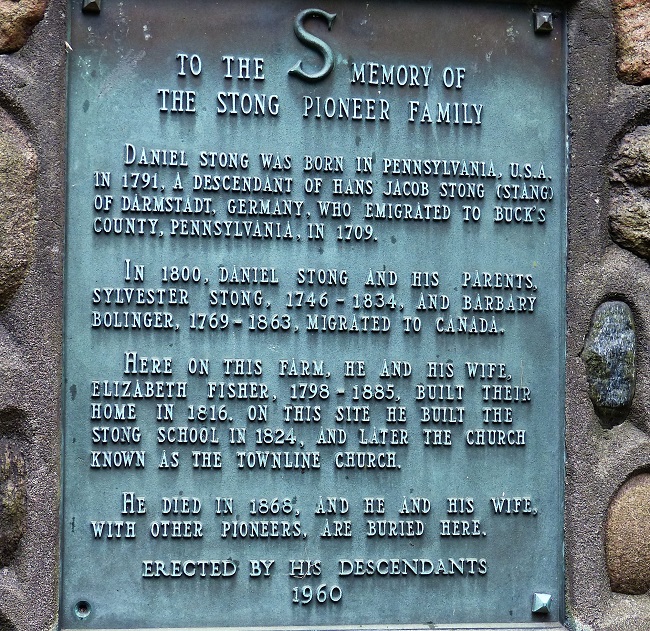 On the other side of the pond is a flour mill, dating from 1842 and nearby is a whole village of mid-19th century buildings. Of all these old buildings, the only ones original to the site are those which Daniel and Elizabeth built. 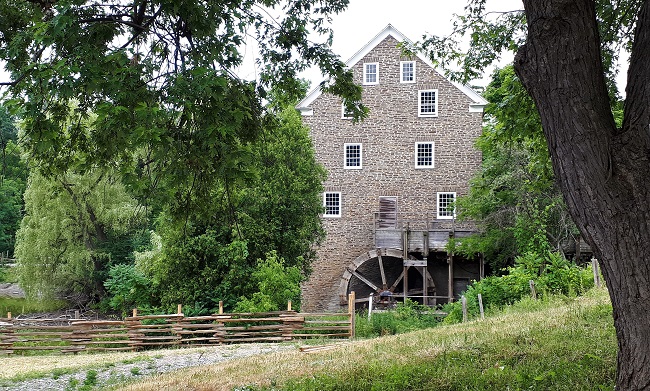 Black Creek Pioneer Village, in the Toronto suburb of North York, has grown around the Stong family farm as historic buildings from elsewhere in Ontario have been added to the collection. Some have been moved here complete, while others have been reconstructed after being carefully dismantled at their original sites. 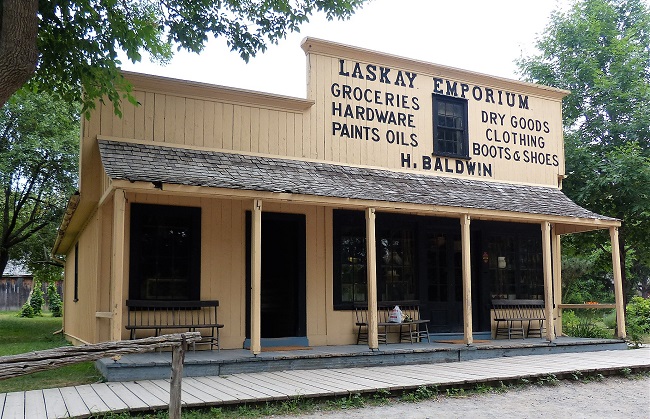 Many of the old buildings are 19th century stores where, like the original occupants, modern artisans practise traditional crafts. They are passing their knowledge onto a new generation keen to keep the old skills alive. 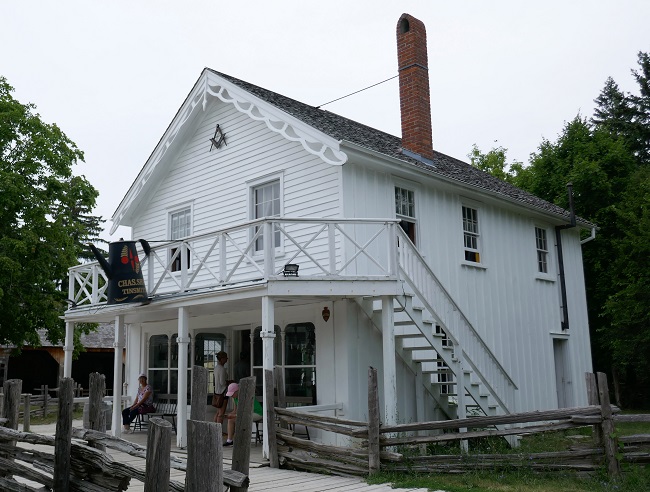 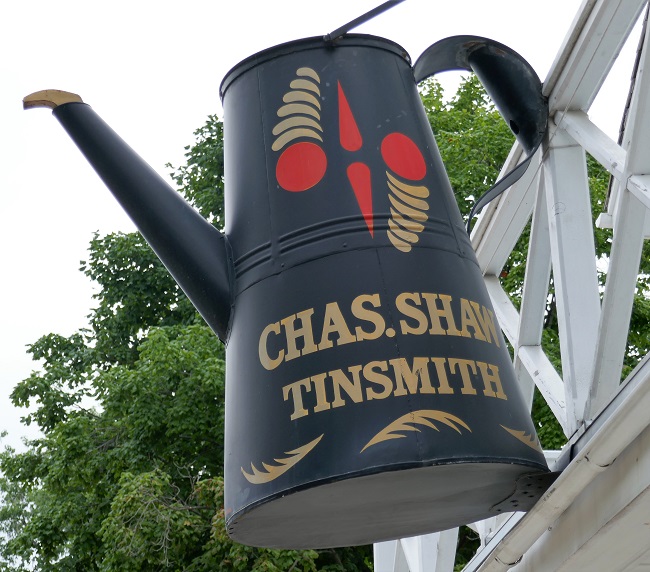 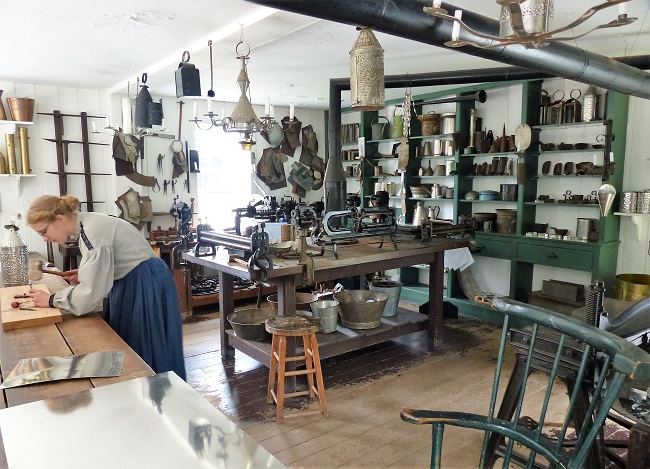 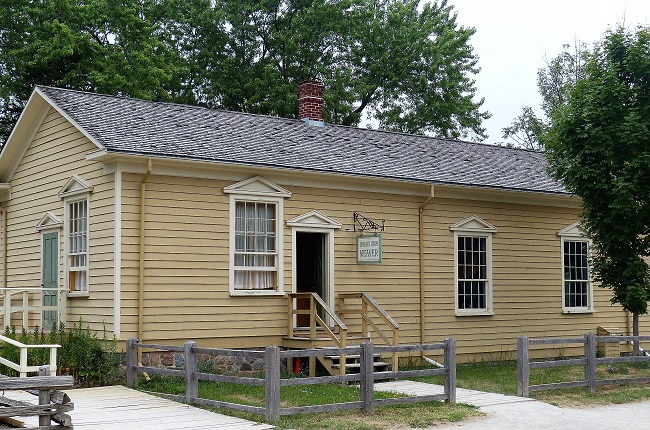 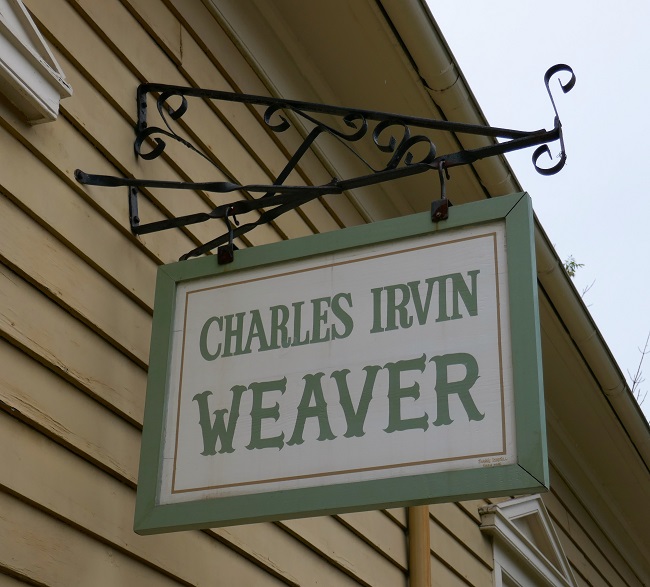 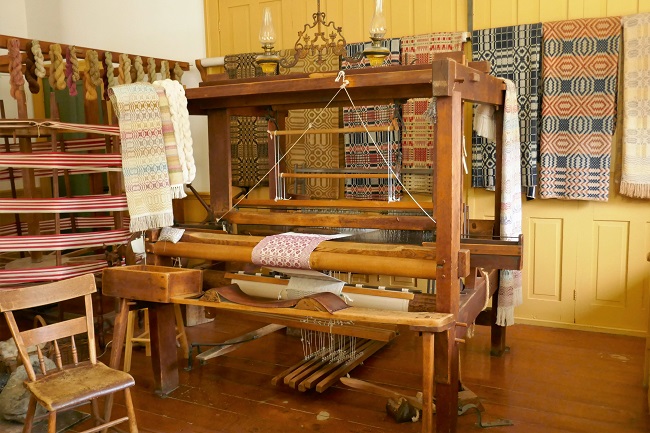 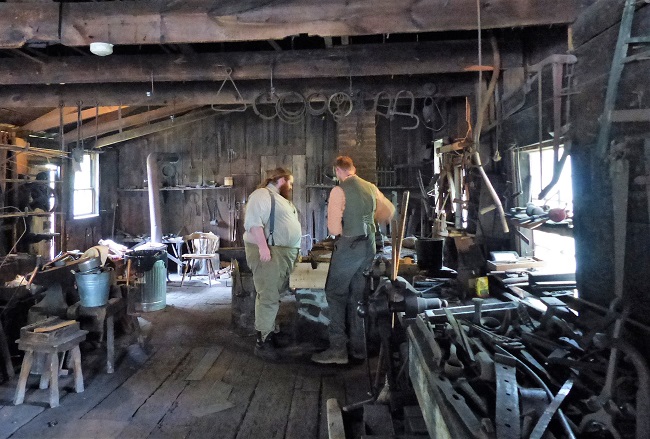 Others are small museums, with their tools of the trade left as if the crafters will return for a new day. The village is a time capsule, set in 1867. 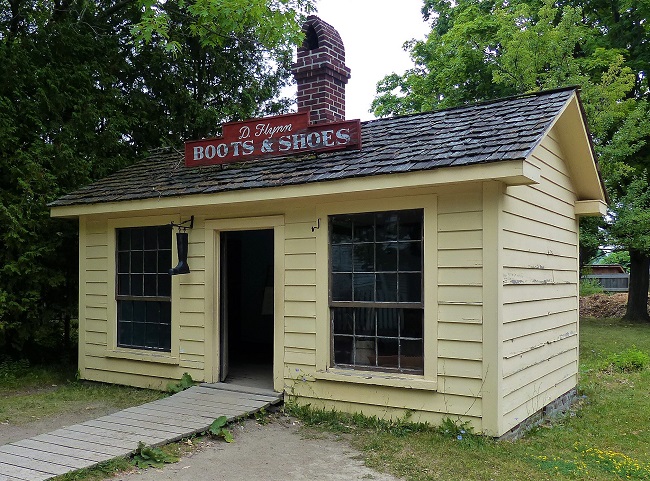 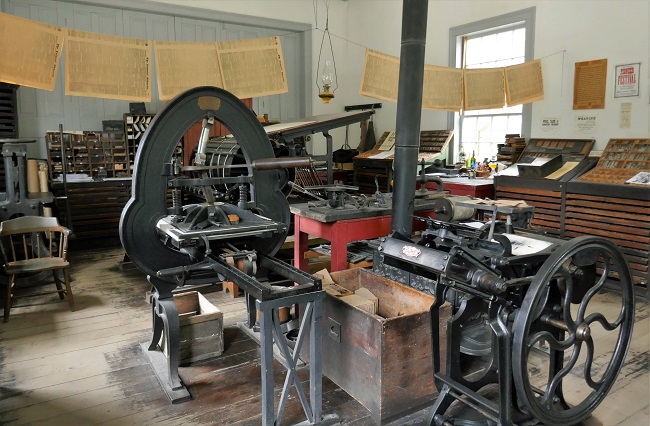 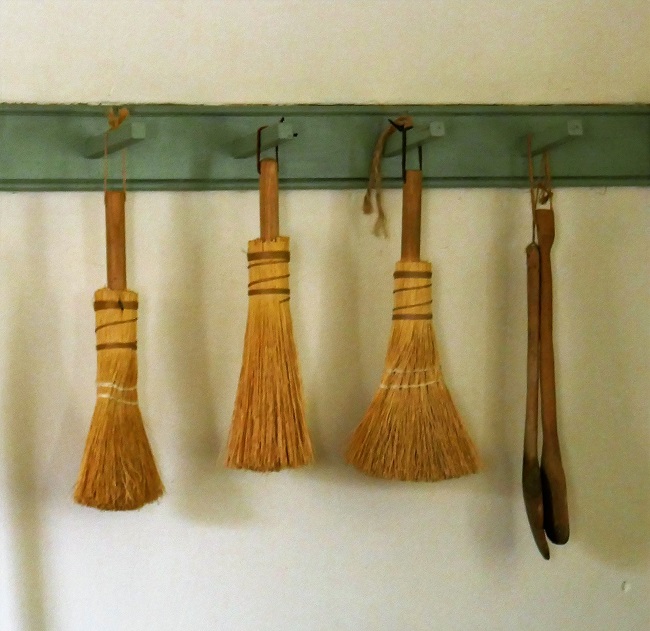 Meanwhile, back at the farm, chickens wander where they please and sheep and goats graze in the field near the barn Daniel Stong built in 1825. 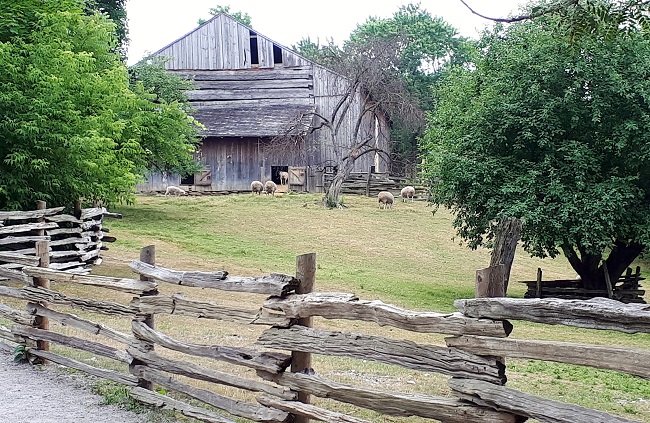 Two farm houses sit side by side next to the mill pond. The first, a simple three room log cabin, was built by Daniel and Elizabeth in 1816. Here they raised eight children before moving in 1832 to a new, two storey home next door. Their second home is much grander, evidence of their hard work and resulting prosperity. Elizabeth must have been delighted with her beautiful new home after living for 16 years in the cabin. It became a hen house and storage shed. 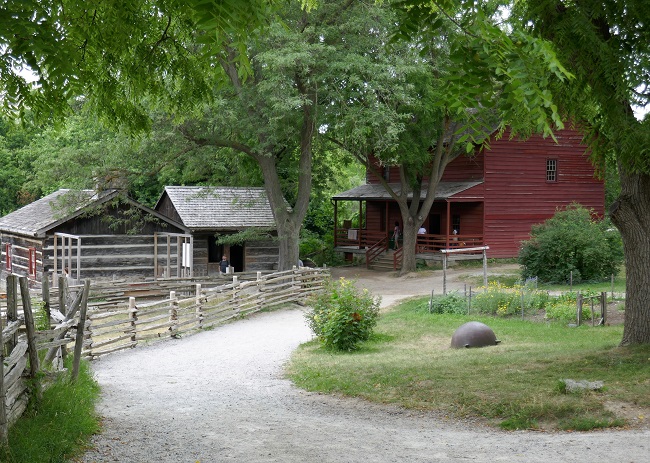 Daniel died in 1868, one year after the time in which the pioneer village is set. If he returned now the little stores, the peaceful mill pond and his 19th century neighbours going about their daily tasks might all look quite familiar. 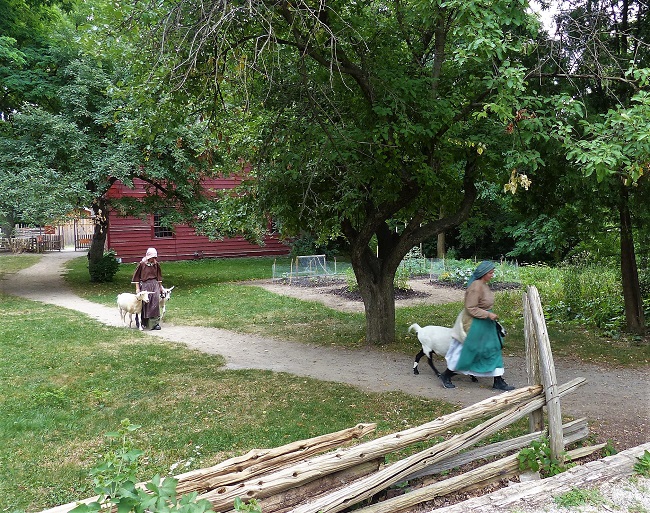 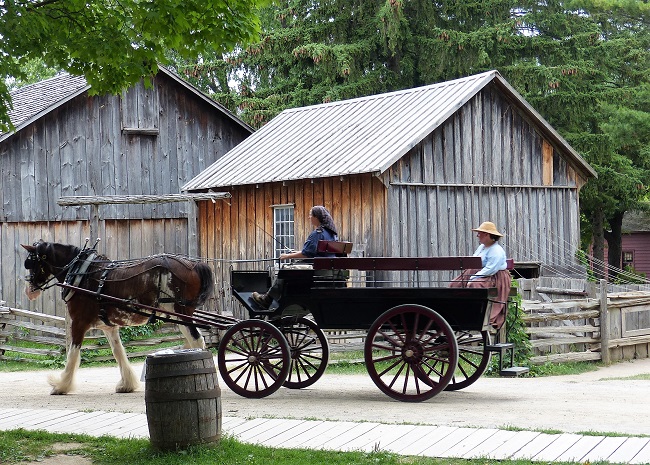 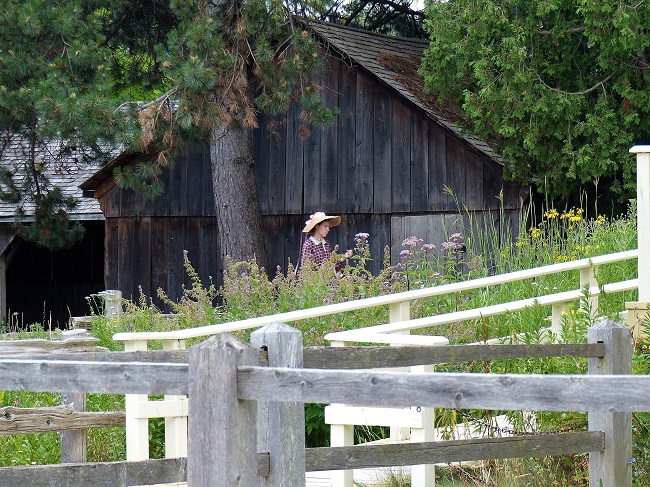 I wonder what would he think if he stepped beyond its boundaries into 21st century Toronto?

Join Jo for Monday walks around the world