The beating of drums drowned out the sounds of early morning commuters as we entered Old Québec through Porte St Jean. Next to Artillery Park, a sergeant of the Compagnies Franche gave a stirring speech encouraging us to join the Governor’s guard. As an added incentive, an artillery man fired his musket, the blast disturbing birds resting in nearby trees. 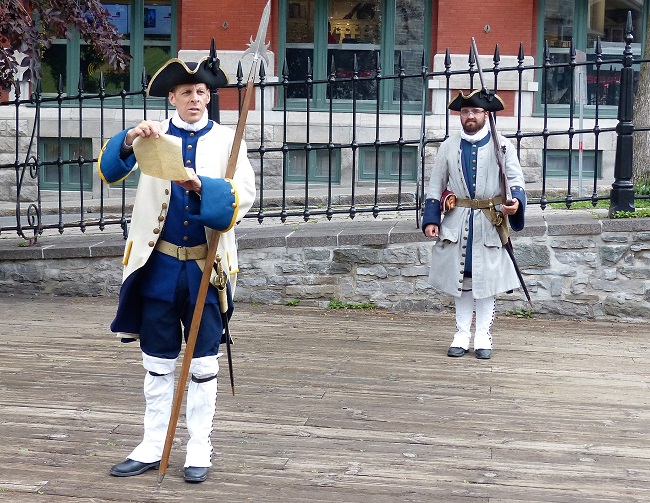 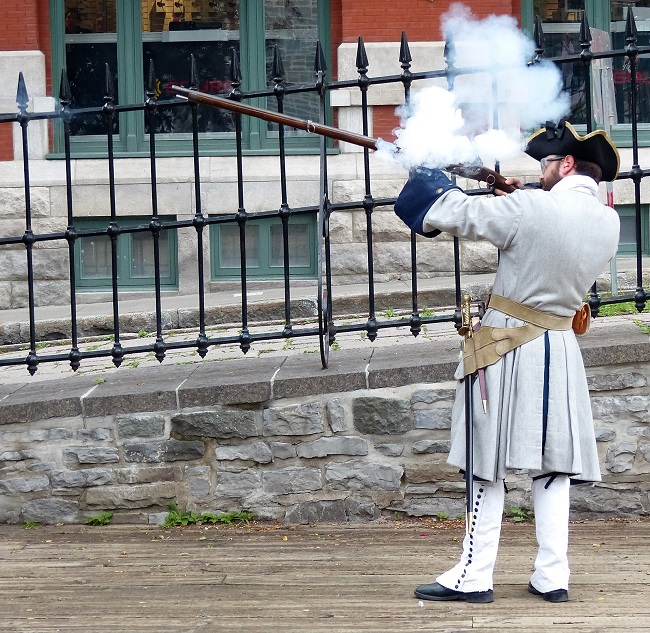 We weren’t tempted to enlist. Instead, we joined Canada Parks guide Pierre-Olivier for a walk along the ramparts of Québec City. 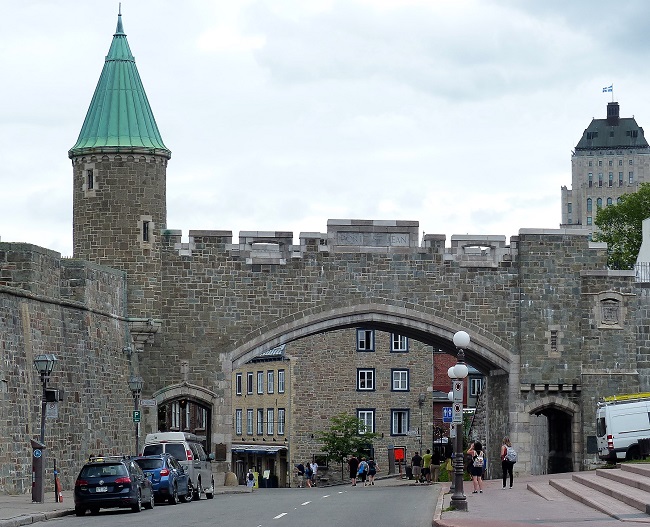 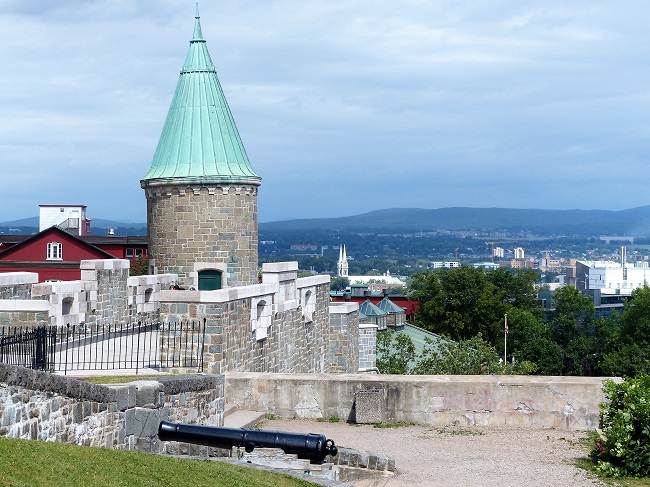 The fortified walls surrounding Old Québec are the only remaining city walls in North America north of Mexico. Recognised as both a UNESCO World Heritage Site and a National Historic Site of Canada, the defensive system of walls dates from the 17th to the 19th centuries. Beginning at Porte St Jean, we climbed to the top of the ramparts. While we enjoyed views of the old city and the newer areas beyond the ramparts, we learned how the walls were constructed, looked inside a soldier’s casemate, fortified to protect the guns inside, and learned how ammunition was stored in the powder magazine. 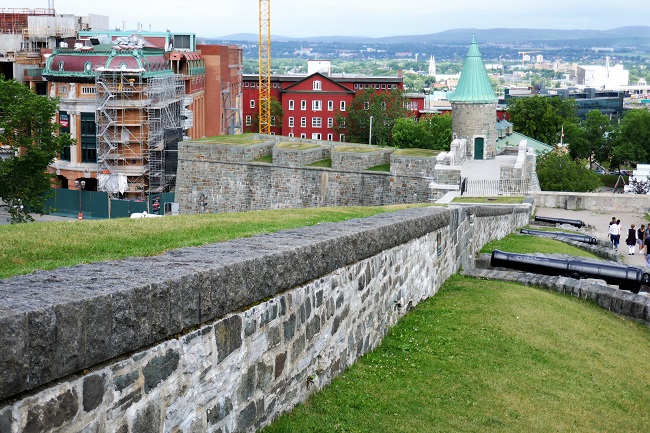 When our walk with Pierre-Olivier ended at Porte St Louis, we continued along the ramparts to La Promenades des Gouverneurs, a walkway built in 1958 to commemorate Québec’s 350th anniversary. 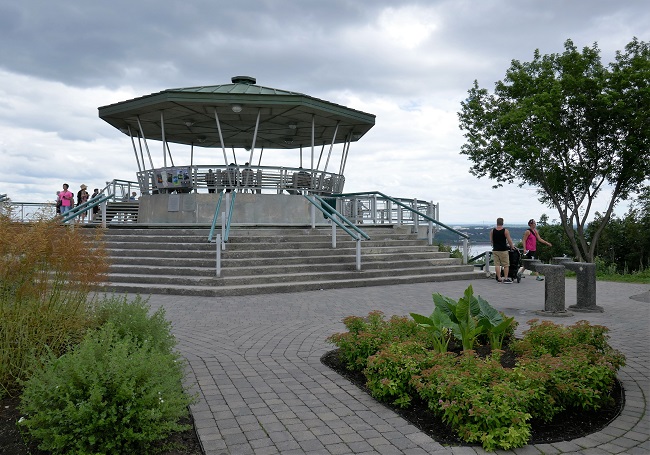 The 655 metre path clings to the side of Cap Diamant, where the fortifications of the old city are still visible. We stopped many times to admire the broad expanse of the mighty St Lawrence River. 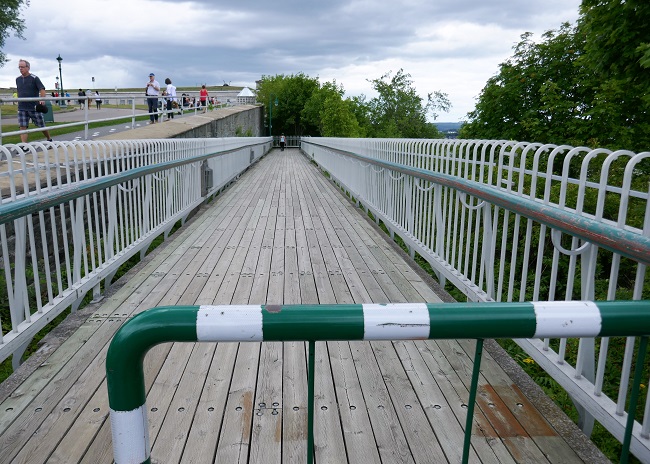 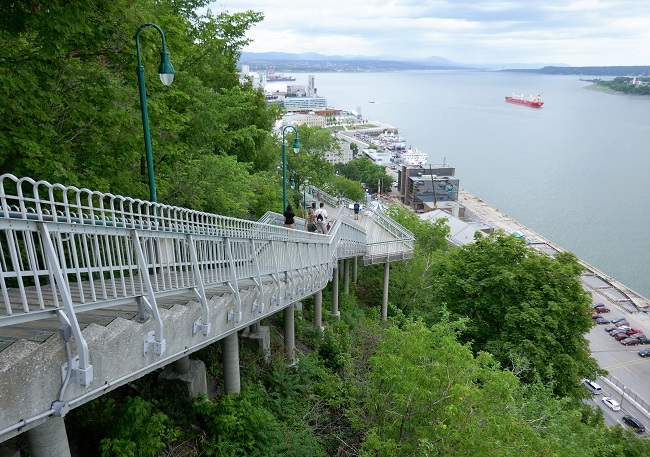 After descending 310 steps we arrived at Terrasse Dufferin, named for Lord Dufferin, Governor General of Canada from 1872 to 1878. It was due to his intervention that Québec’s famous city walls were saved from demolition, before being repaired and restored. In his final act as Governor General, Lord Dufferin laid the foundation stone for the terrace that bears his name. 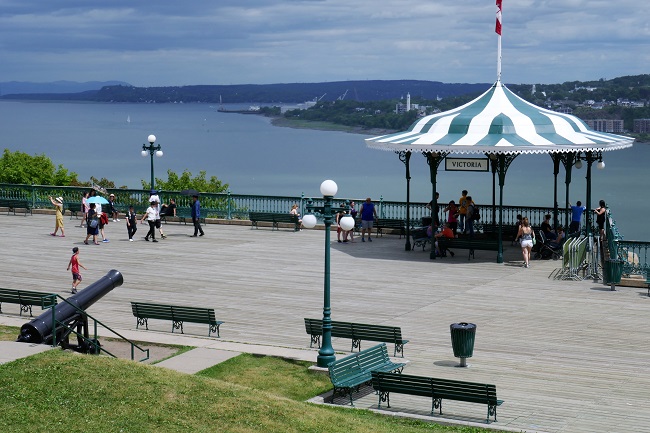 The 671 metre boardwalk, high above the river, leads from the promenade to the base of Château Frontenac, Québec’s famous luxury hotel, opened in 1893. 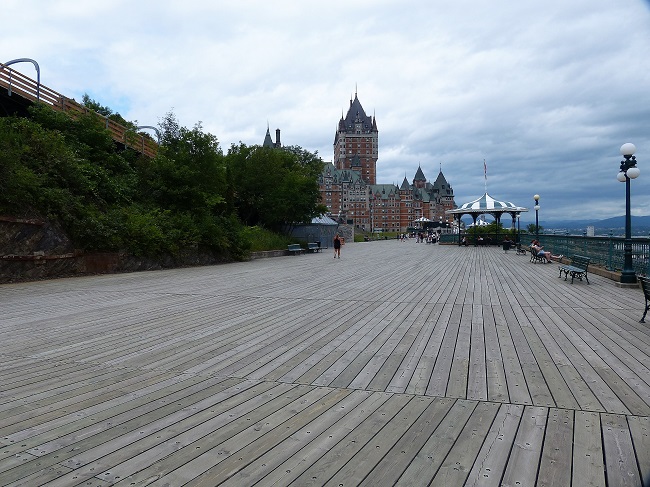 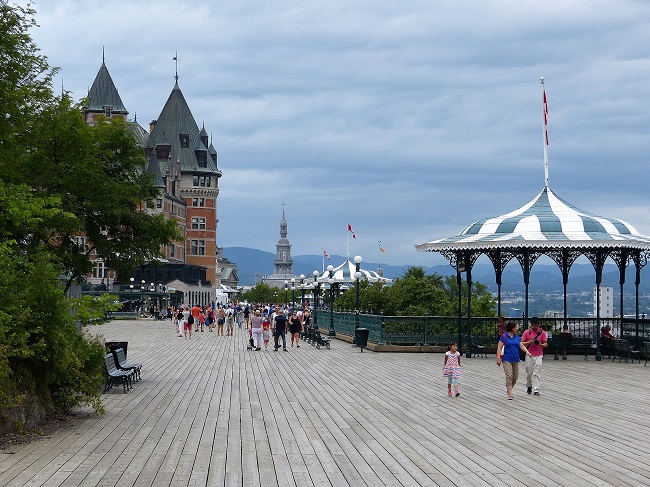 At the end of the terrace, we boarded the Funiculaire du Vieux-Québec for an ride down the steep hill to Petit-Champlain and Place Royale, site of the first French settlement in North America in 1608. It was easy to imagine we’d been transported to 17th century France as we wandered along cobblestoned streets past beautiful French styled buildings. 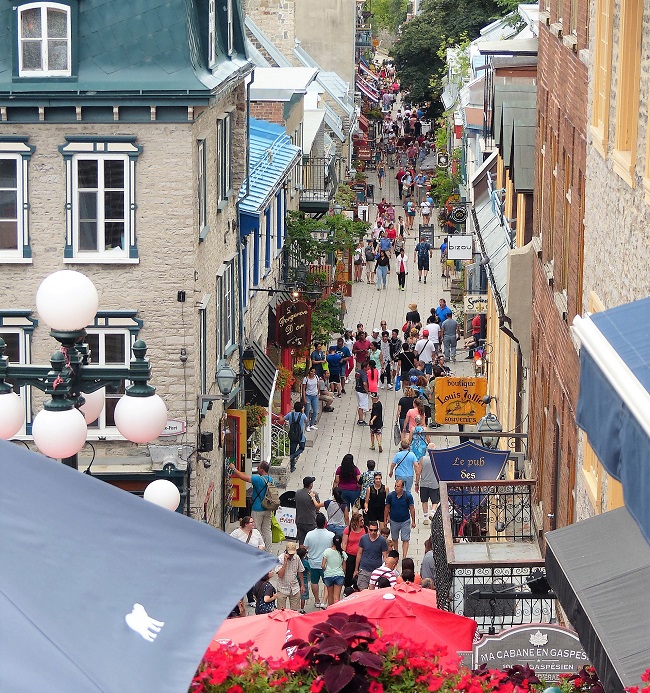 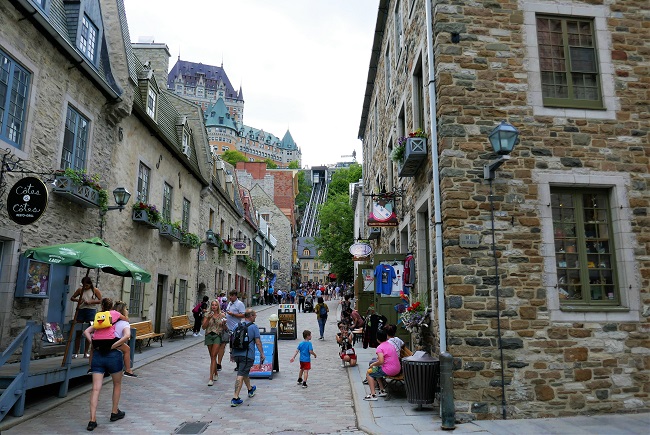 Before parting ways with Pierre-Olivier earlier in the day, we’d asked him what he would suggest we do in Québec. His recommendation – a 12 minute ferry ride across the St Lawrence River to Lévis. After several hours of walking, it made a nice change to sit on the outside deck enjoying the cool breeze. From the ferry terminal, we walked along Quai Paquet, where children played among 160 jets of a fountain set into the pavement.

A red wooden staircase zigzagging up the cliff beckoned and, with no idea what was at the top, we climbed up. All we found was a quiet suburban street, but when we turned around the view over the river to Québec City, with Château Frontenac towering above the old town, was stunning.

After returning on the ferry, we joined the crowds in front of the Fresque des Québécois mural, painted on the side of Maison Soumande. The beautifully detailed mural depicts fifteen of Québec’s most important historical people, including the city’s founder Samuel de Champlain and its protector, Lord Dufferin.

Instead of ascending on the funiculaire, we climbed our third set of stairs for the day. The Escalier Casse-Cou, also known as the Breakneck Stairs because of their steep incline, are the city’s oldest steps, built in 1635. When we reached the top, we had one last Québecois destination in mind – Chocolato. This chocolate themed café on Rue Saint-Jean has an incredible range of ice creams, sorbets and sundaes and the most difficult decision of the whole day was what to choose. After much deliberation, we ordered sundaes; mine was a Forêt Noir, Glen’s a Caramel Royal.

Our day ended where it had begun, at Porte St Jean, but this time the beating we could hear was not the drums calling us to action, but our hearts as we savoured every delicious mouthful of our afternoon treats.

38 thoughts on “Feel the Beat”