We’d never been on a cruise before, so our first glimpse of our floating holiday home was an exciting moment. Pacific Dawn was docked at the Portside Wharf Cruise Terminal at Hamilton, just a few kilometres from the mouth of the Brisbane River.

The embarkation procedure was very efficient and soon we were on board. After a delicious lunch in the Waterfront Restaurant we had time to explore and discover the most important locations – the restaurants and bars,  coffee shop and ice cream stand. 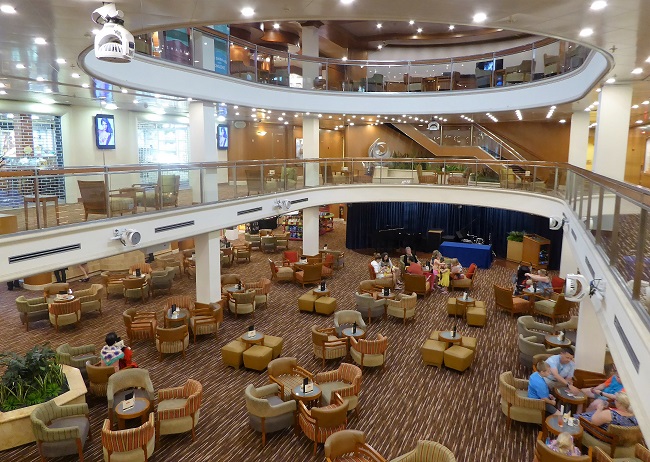 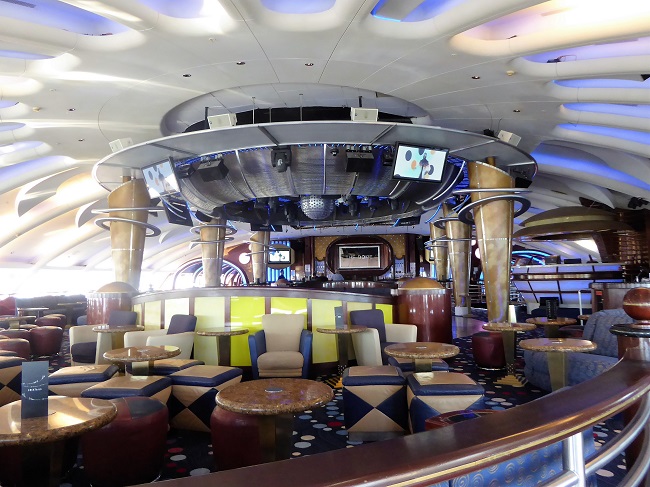 From Deck 14 we had a beautiful view of the city of Brisbane and the Brisbane River.

The ship set sail, slowly making her way downriver under the twin spans of the Sir Leo Hielscher Bridges. 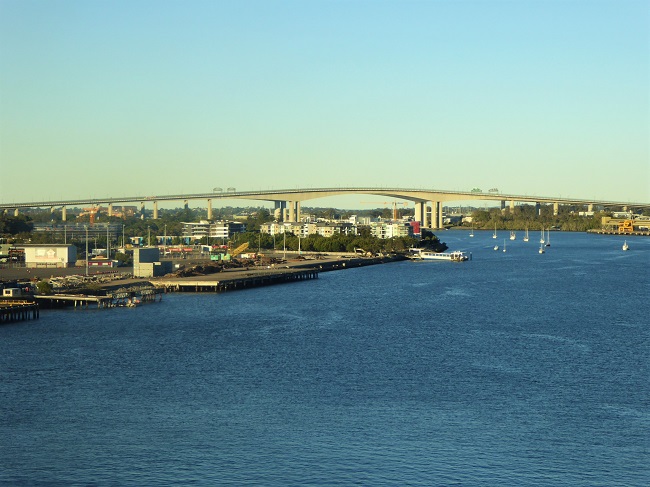 The reflected lights of the Port of Brisbane on Fisherman Island merged with the glow of the setting sun as we sailed from the mouth of the river into Moreton Bay. 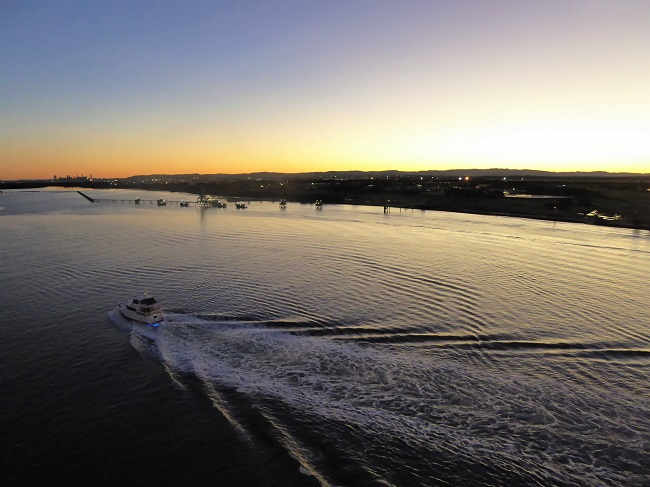 As darkness fell, the decks of the ship lit up for our first night on board. 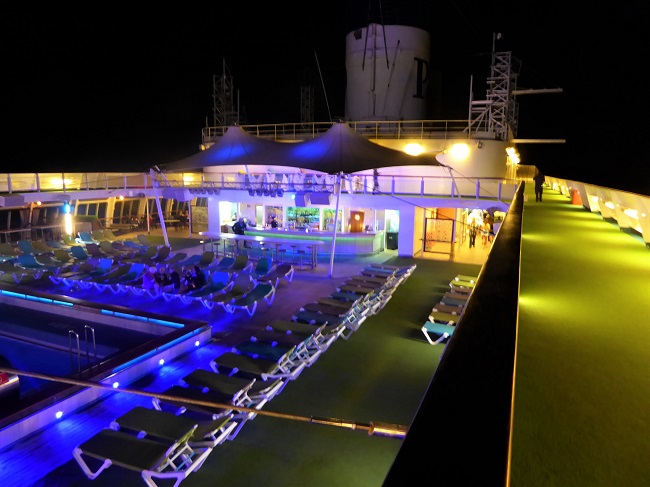 Lake Argyle, just over the border in Western Australia, is large. At 100% capacity, it holds 11 000 billion litres of water,  21 times more than Sydney Harbour. It is the largest man made lake in the Southern Hemisphere and the eighth largest lake in the world.

The lake was created by damming the Ord River and harnessing the massive volume of water that flows during the wet season. The dam wall, constructed of earth and rock, was completed in 1972, ensuring a regulated water supply to the Ord River Irrigation Scheme all year round. A hydroelectric power station at the base of the dam wall generates enough power to service Lake Argyle village, the towns of Kununurra and Wyndham and the Argyle Diamond Mine.

As well as providing life-giving water and clean energy, the lake is the perfect location for leisure activities. We went cruising on a sleek orange catamaran, Kimberley Durack, named after the man whose vision led to the creation of Lake Argyle. 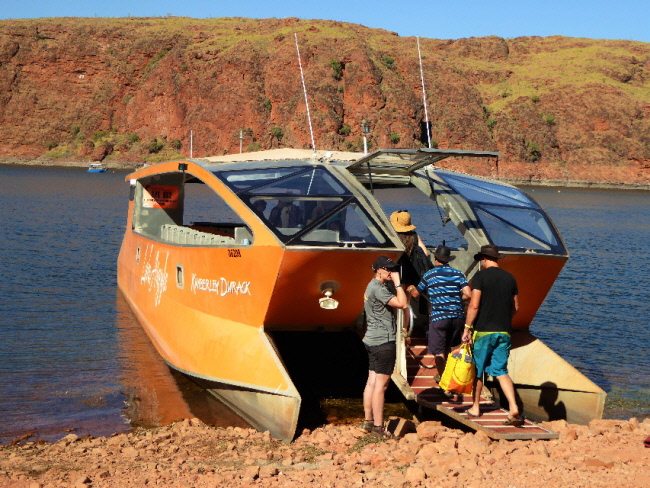 Because of its size the lake is classed as an inland sea and at times the shores were distant smudges on the horizon. We sailed from one calm bay to the next around islands that were once mountain tops.

We saw freshwater crocodiles sunning themselves in the late afternoon sunlight, seven-spotted archer fish in the shallows and rock wallabies grazing on the shore. 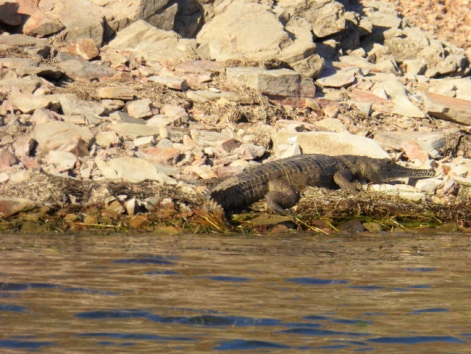 In late September the water in the lake is a comfortable 26 degrees, and with beverages, cheese and crackers within easy reach, a swim was a highlight of our cruise. 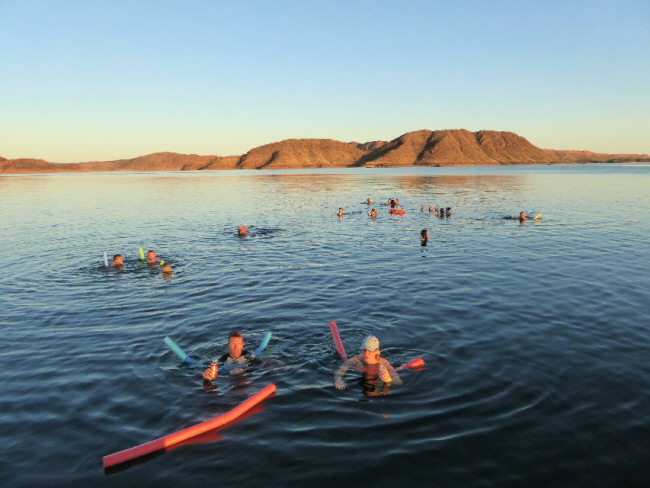 As the sun went down on the western side of Lake Argyle, the colours were deepened by smoke from bushfires in the hills,

while on the eastern shore, a full moon rose over the mountains of the East Kimberleys. This beautiful landscape is larger than life!