Our holiday in New Zealand was wonderful and we enjoyed every day. There were some experiences, however, which were special and made our trip even more memorable. Here, in no particular order, are my 10 best things about New Zealand.

1. Best Meal  We celebrated our 30th wedding anniversary at Fox Glacier and asked the locals for a dinner recommendation. They sent us to the Matheson Café on the shores of Lake Matheson in the Westland National Park. The food was superb – New Zealand lamb and salmon with freshly steamed greens, followed by chocolate and Baileys cheesecake and homemade ice cream, and the service was excellent. It was the perfect way to end a lovely day.

2. Best View  Our apartment at The Sunset Motel at Fox Glacier had a floor to ceiling glass wall facing on to the mountains and this was what we saw every morning! If you’re looking for a comfortable self-contained unit in Fox that’s not on the highway, this is the place to stay. 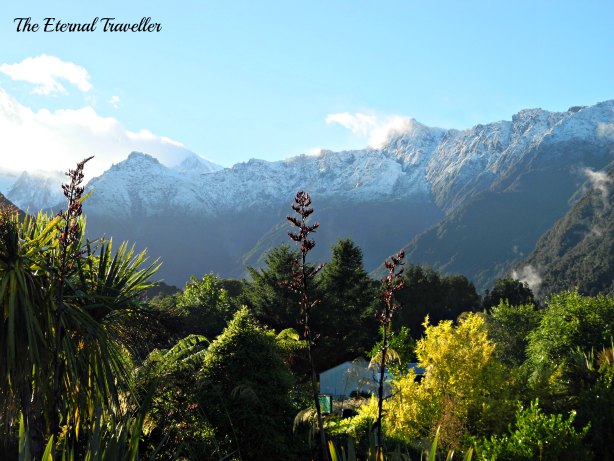 3. Best Ride  We did a half day heli-hike with Fox Glacier Guiding. The helicopter ride up to into the remotest parts of the glacier wasn’t just a quick pick-up and drop-off, but a magnificent journey past the town and over the glacier to its highest reaches before swooping back past Victoria Falls and landing on the ice. The pilot made sure his six passengers all had plenty of camera time and he gave a running commentary during the flight. It was a fantastic way to start our day. 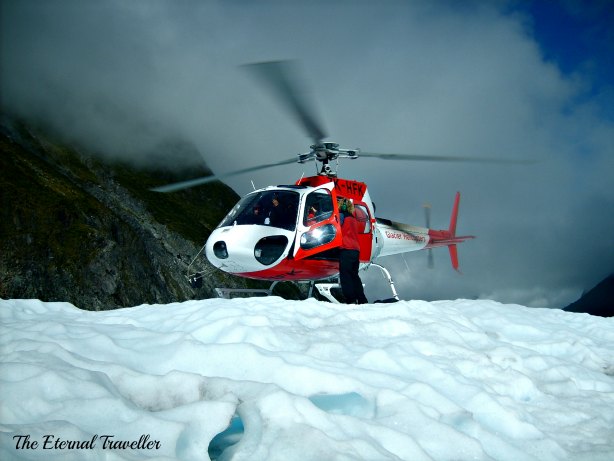 4. Best Experience  Our heli-hike experience was amazing and the absolute highlight was the time we spent in an ice cave. The entrance was tiny; we had to make our way down with only a knotted rope and our crampons for support. (My descent was more of an uncontrolled slide than a climb, and for a few seconds Mr ET thought my crampons were heading for his face!) Once inside the feeling was eerie and at the same time awe-inspiring. I felt like a true mountaineer, especially when I had to climb back out again.

5. Best Museum  The Lakes District Museum in Arrowtown is located in the old Bank of New Zealand on Buckingham St. It’s much more than a simple collection of local items and recollections; the history of the Māori, the first European settlers and the goldminers who came to Arrowtown is told in interactive displays, photographs and original texts which bring to life their colourful stories. There’s also an art gallery which presents beautiful local works and historical displays.

6. Best Bed  We stayed one night in Picton before travelling on the Interislander Ferry to Wellington. This was one of only two nights for which we hadn’t booked accommodation and we were dismayed to find that almost every hotel and B&B had No Vacancy signs. Eventually we found the Mercure Picton Marlborough Sounds which still had vacancies. The price quoted was reasonable but the desk clerk was very apologetic because the room had a round bed! For us at this stage any bed would have done, so a round bed wasn’t a problem. It was colossal and comfortable – what more could we have asked for?

7. Best Beach  Ohope Beach on the east coast of the North Island is an 11 kilometre stretch of pristine sand and clear water with views to White Island, a live volcano 48 kilometres off shore.  It has been voted “New Zealand’s Best Beach” so we’re not alone in recommending Ohope Beach as a must- see addition to your itinerary.

8. Best Baguettes  I am not fond of baguettes – to me they are just long pieces of crust. This may seem sacrilegious to lovers of this French staple and for that I apologise. But at La Boucherie du Village in Akaroa I was converted. We bought baguettes freshly baked on the premises and hot out of the oven. They were truly spectacular! They also had a vast range of New Zealand meat and we bought our dinner there – delicious.

9. Best Shower  And now we come to the most important best of the best: the shower. We stayed in six self-contained units in the three weeks we were in New Zealand and the showers in five of them were terrible. To be more specific the problem was with the shower heads. Some had so little water pressure that I had to run around the shower cubicle trying to catch the drops. A couple had difficulty maintaining a water temperature that was warm enough for long enough. The one shower that had great water pressure did not have a door which meant that the whole bathroom got wet, not just me. The 5 Diamond Belmont Lodge at Porirua had a faultless shower head – perfect pressure and temperature. The rest of our studio unit was really nice too but the shower was superb.

10. Best Destination  We’ve had several overseas holidays and our trip to New Zealand ranks among our favourites. From Australia the flight to most other countries is very long and tiring, but it’s a just three hour flight to Christchurch. As usual, we spent a longer time in fewer places and saw everything we wanted to in each area. Even so, we’ve only been to a small part of this beautiful country and we will definitely be returning again soon. For us, New Zealand is the best destination of all! 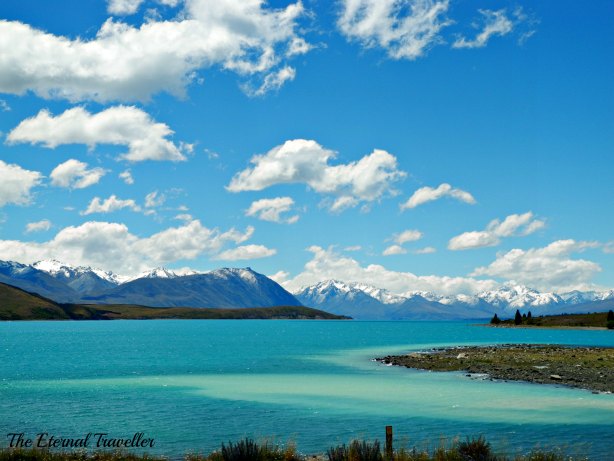