When travelling, one of the niceties we all look forward to is easy access to rest rooms, as Mrs Carmichael recently mentioned in this post. Usually we’re grateful if they are clean and well-maintained. When they come with a great location, that’s a bonus. Here are some loos and their amazing views… 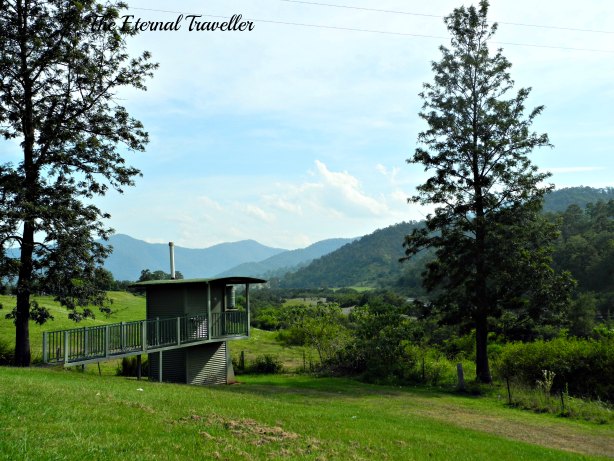 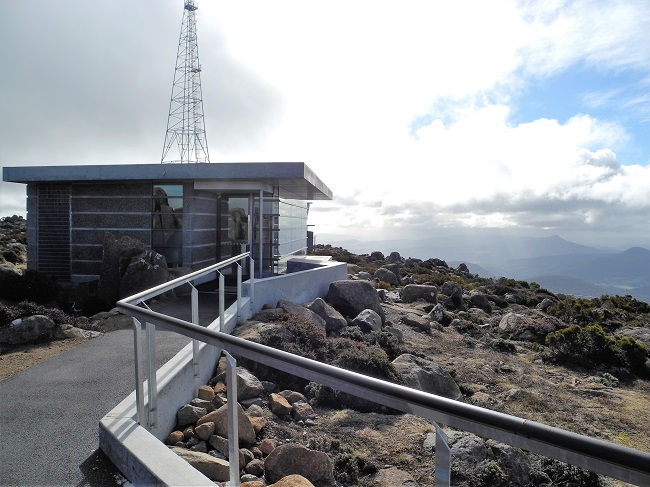 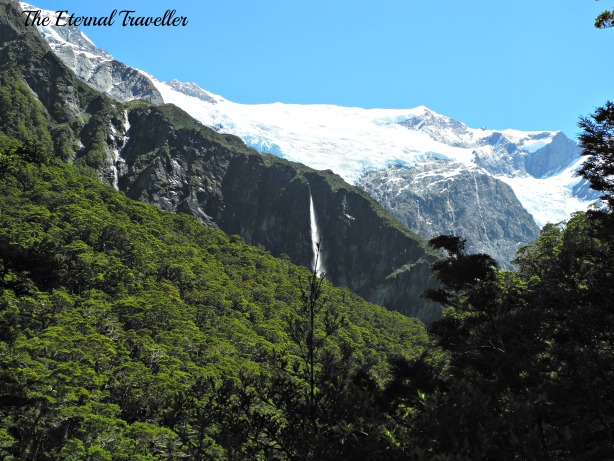 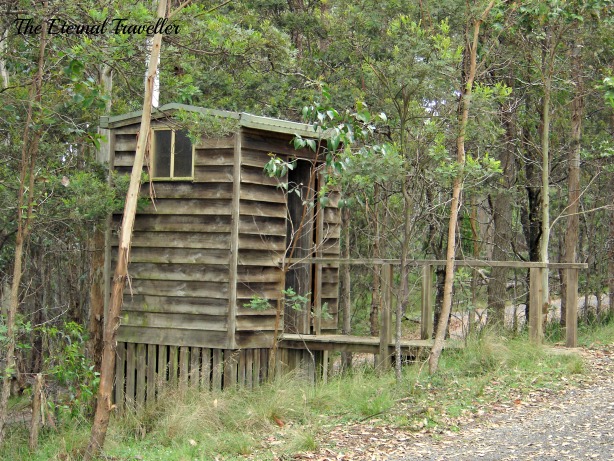 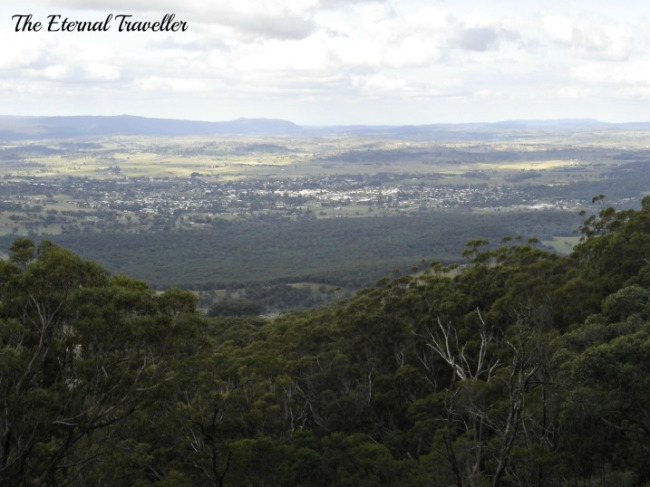 And finally, a loo with a view of you…eeeew! 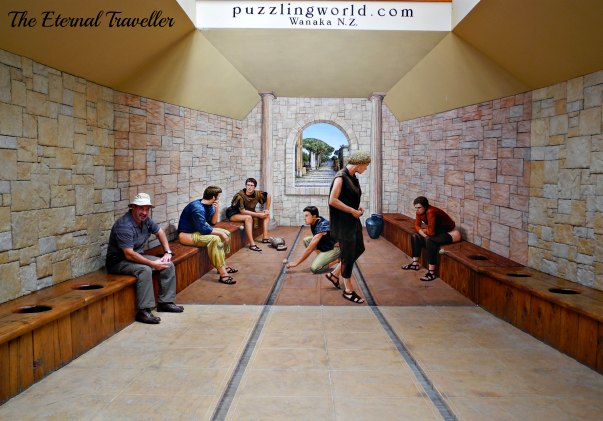 On 2 January this year a storm front bearing driving rain, gale force winds and even snowfalls passed over the west coast of the South Island of New Zealand. Walkers and car drivers were trapped by landslides and bridges and roads were washed away. On the east coast at Akaroa we were blissfully unaware of the dramas caused by this unseasonable weather. The first sign of the storm for us was the heavy rain which fell on our last night. The following day as we drove from Akaroa to Wanaka we were congratulating ourselves on our good fortune in seeing the Southern Alps blanketed by fresh snow.

It was only on 5 January in Wanaka that we found out that the storm might have played havoc with our travel plans. At the Tourist Information Centre we saw a travel warning: State Highway 6 was closed north of Harihari. Several spans of a major bridge over the Wanganui River had been washed away and it was not known how long the road would be cut.

Our plan after leaving Wanaka on 7 January had been to travel west to Fox Glacier and spend a day there before a full day’s drive north east to Picton along that same highway. After receiving some local advice we decided that as much as we wanted to see the glacier it would be wiser to make our way up the east coast instead. Luckily we were just a few hours inside the full refund deadline for cancelling our accommodation at Fox Glacier.

We had almost convinced ourselves that our new itinerary would just as enjoyable when on 6 January we started hearing reports that the bridge would be repaired and reopened by 8 January. In Australia the words “roadwork” and “haste” are never heard in the same sentence so we were sceptical when we heard the bridge would be passable just six days after being so badly damaged. Those same locals whose first recommendation had been not to take the risk now said that if the New Zealand Transport Agency stated the bridge would be fixed, then that’s what would happen.

So it was with bated breath on the morning of 7 January that we phoned the owner of the holiday apartments in Fox Glacier to ask firstly if they’d heard any news about the bridge and secondly if we could re-book our unit if the road was open. She answered yes to both questions.  Not only was the bridge being repaired but it would be ready a day ahead of schedule. Our west coast adventure was back on track!

After an incredible visit to Fox Glacier we headed north along State Highway 6 on 9 January in pouring rain, passing roadwork which continued on regardless of the conditions. 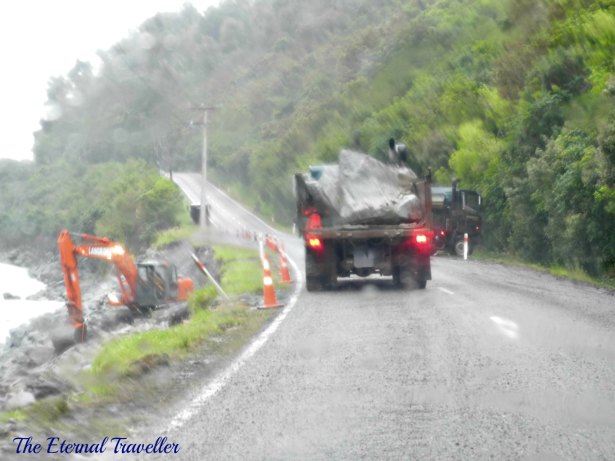 These photos were taken through the windscreen of the car. 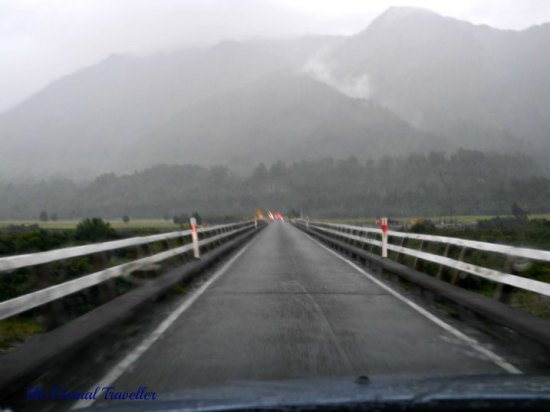 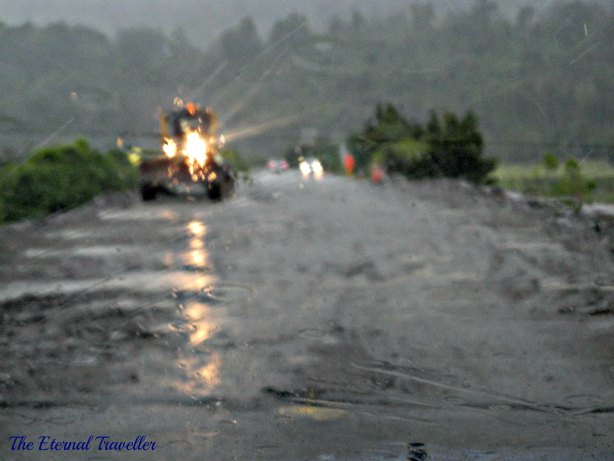 If it hadn’t been so wet and cold I would have stopped and thanked these workers and given gold stars all round. Their efforts were truly worthy.

When driving between Wanaka and Queenstown there are two routes that can be taken. The more dramatic of the two is the Crown Range Road, the highest main road in New Zealand. At 70 kilometres it’s a shorter journey than the road through Cromwell but with the hairpin bends of the Zigzag and multiple stops to admire the scenery it will definitely take longer. 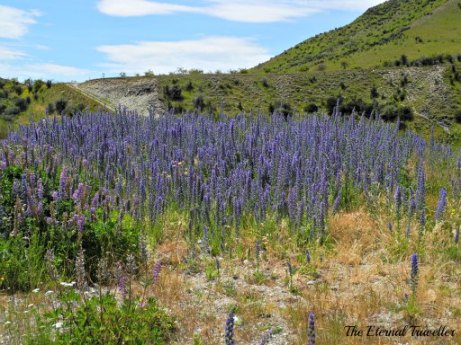 Just out of Wanaka the hills are resplendent with lupins, growing wild in a rainbow of colours. Cars are parked along the roadsides while travellers become landscape photographers.

The road continues through the old gold mining town of Cardrona, between the Crown and Criffle Ranges and onwards to the summit. At an altitude of 1076 metres the views look across to Queenstown and Lake Wakatipu.

From there it’s all downhill. Hold tight on the winding switchbacks of the Zigzag all the way to the turnoff at Arrow Junction. 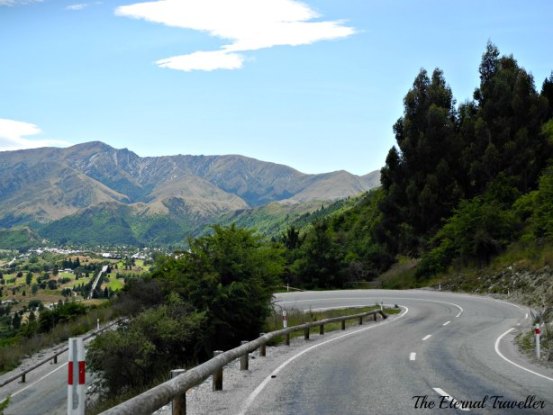 I’ve never been a big fan of puzzles. Crosswords will do just that – make me cross, and a jigsaw puzzle is not my idea of fun, so I wasn’t sure that a visit to Puzzling World in Wanaka would be the ideal way to spend an afternoon. But once I saw the Leaning Tower of Wanaka and the Tumbling Towers at the entrance I knew that it was going to be entertaining, intriguing and a whole lot of fun.

There are seven different rooms and activities in the complex. The entrance takes visitors past the Puzzling Café, where perplexing objects are found on every table, and diners are reflected in the kaleidoscope ceiling.

The holograms on display in the Hologram Hall seem to change depending on the angle from which they are viewed. This collection is one of the largest in the world and the 3D images are astounding. 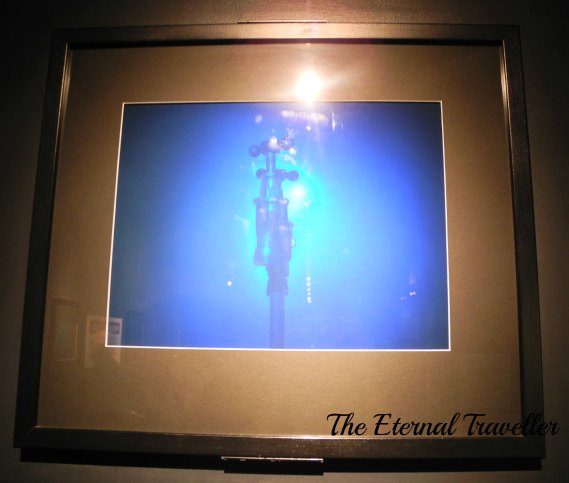 If you feel like someone’s watching you in the Hall of Following Faces you’re not alone. There are 168 faces on the walls, all of them well-known, and it’s a discomforting feeling as they appear to turn and look at everyone.

When viewed from the outside the Ames Forced Perspective Room looks like a normal room. It’s only when people enter that it becomes apparent that all is not what it seems and what is large in one corner becomes tiny in another. This technique was used in “The Lord of the Rings” to create the illusion of small and large creatures.

I wonder how often the words “How did they do that?” are spoken in the Sculptillusion Gallery. More than 20 works of illusion and deception are exhibited. While many are hands-on their secrets are not easily revealed. 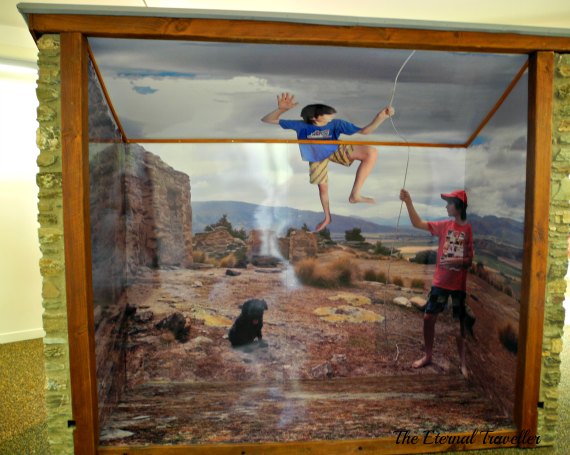 The most fascinating room of all is the Tilted House where, even though we are all certain that we are standing upright, our senses tell us otherwise. Water flows uphill and the balls on the billiard table roll up instead of down. It’s compelling and confusing at the same time, and strangers laugh with and at each other. 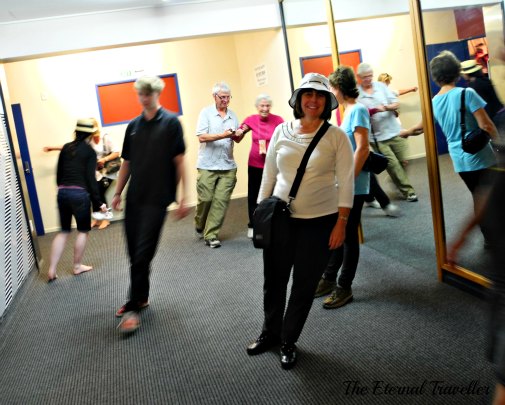 Back on level ground, outside the Illusion Rooms, is the Great Maze. It’s a labyrinth, the first of its type in the modern world. There are one and a half kilometres of passages, although once inside most people tend to walk between three and five kilometres before finding their way out again. The elevated walkways give a false sense of assurance. The way through the maze looks easy enough to memorise from above but in the passages below each turn looks the same as the one before. There are several exits for those who tire physically or mentally although giving up is not an option for most.

Please don’t ever give me a book of crosswords or a 500 piece jigsaw puzzle. But a visit to Puzzling World…I could do that again.

There are more than 3000 glaciers in the South Island of New Zealand and seeing one up close is usually on the must-see list for visitors. Rob Roy Glacier in the Mt Aspiring National Park is one that tourists can easily see – for free and in safety.

From the township of Wanaka it’s an hour’s drive to Mt Aspiring National Park, through spectacular scenery and lush farmland. The last part of the journey is a gravel track with 11 fords, several cattle grids and some very tight turns, but it’s worth the effort to reach the start of the Rob Roy Glacier walking track. 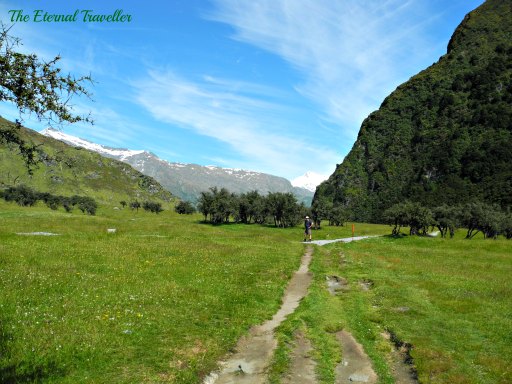 The five kilometre track starts from the Raspberry Creek car park and meanders across the river flats to the suspension bridge across the Matukituki River.

From there it begins to climb uphill – a gentle incline in some places and steeper elsewhere, following the Rob Roy Stream through shaded beech forests carpeted with ferns and mosses. 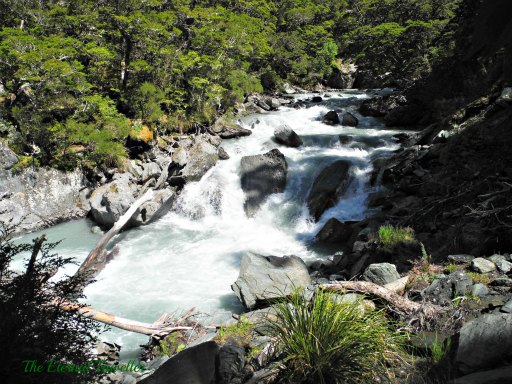 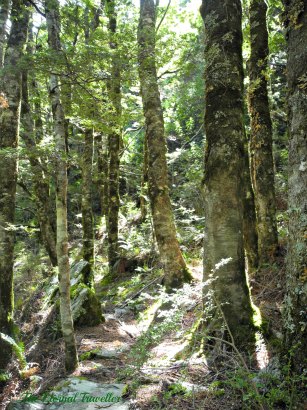 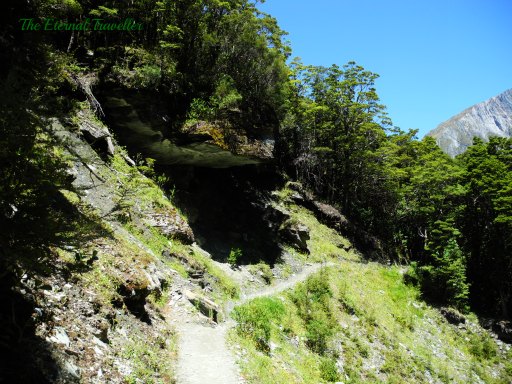 It’s exciting to reach the first lookout and see the glacier at last.

After leaving the lookout there are still of couple of kilometres of uphill walking. At the head of Rob Roy Valley the forest gives way to alpine plants which grow above the tree line, and at 1000 metres above sea level the viewing point at the end of the track has uninterrupted vistas of Mt Rob Roy and the glacier. 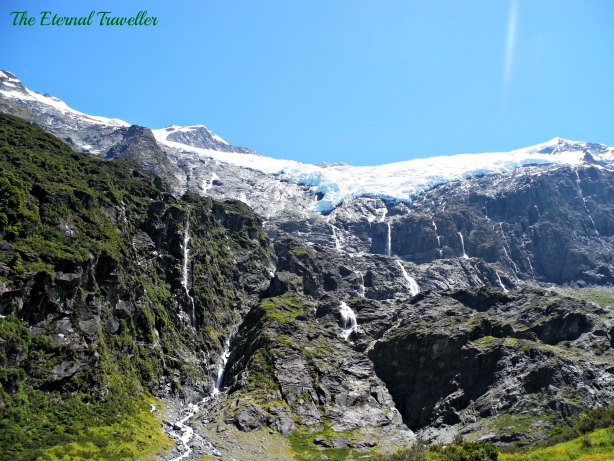 The track can be very busy in Summer but even with large numbers of visitors the area around the viewing point has an air of quiet reflection. Everyone seems to appreciate the grandeur of the scene before them, and their good fortune in being able to witness this amazing natural spectacle in their own space and time.

When we checked out of our unit on our final morning in Akaroa we asked the manager about the best route to take to State Highway 1. On the map it looked as if we would have to drive all the way back to Christchurch before we headed southwest towards Wanaka. He was very helpful and gave us detailed directions which were easy to follow. His parting comment was: “It’s not a very interesting drive though. There’s nothing much to see.”

We left Banks Peninsula behind and headed west towards the highway. Once we turned left onto the highway we found ourselves travelling parallel to the Southern Alps. After cool overnight temperatures a fresh snowfall adorned the mountaintops. 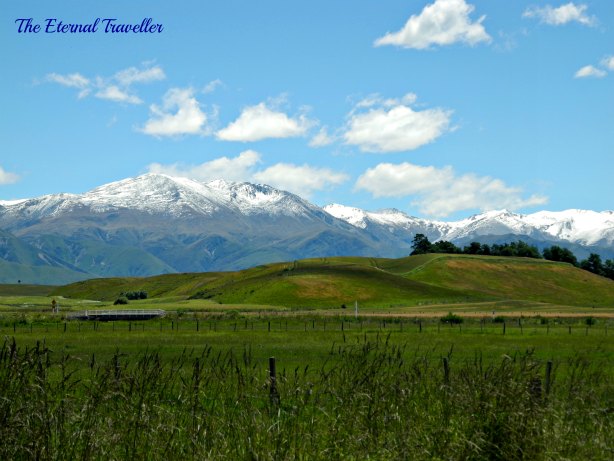 Rakaia is the salmon capital of New Zealand and home of the Giant Salmon, Salmon World and Salmon Tales Café. The choc chip cookie I had for morning tea in the café rivalled that salmon for size. 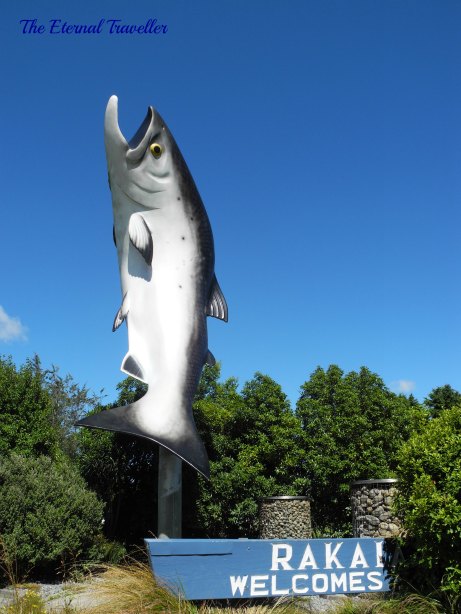 After a long drive along the Fairlie-Tekapo road we rounded a corner and there was Lake Tekapo. The beautiful turquoise colour of the lake is caused by “rock flour” – particles of rock ground by glacial movement and suspended in the water.

The Church of the Good Shepherd, the first church in this area, stands on the shore of Lake Tekapo. It was built in 1935 and is placed to take full advantage of the glorious view.

Near the church is a bronze statue of a collie dog which pays homage to the work of the sheepdogs of Mackenzie Country.

Lupins grow wild in this part of New Zealand and there are places where the roadside is a sea of purple, pink and cream. Their colours brighten the stark landscape of the highway between Lake Tekapo and Lake Pukaki. 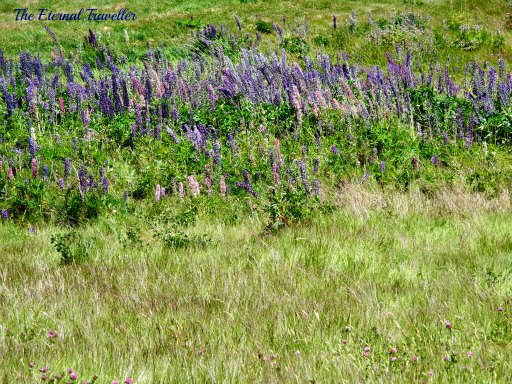 Finally we reached Wanaka and its lake. Here too the mountains surrounding Lake Wanaka were blanketed with snow and unlike the other lakes the water was a deep, dark blue.

Was the manager correct in his assessment of the five hour drive from Akaroa to Wanaka?