Neuschwanstein Castle is one of the most popular castles in Europe with more than 1.3 million people visiting it and neighbouring Hohenschwangau Castle every year. For many the castle looks familiar. Walt Disney and his designers used it as the inspiration for the castles of Sleeping Beauty and Cinderella. It is set on a steep and rugged hill overlooking the tiny village of Hohenschwangau in southwest Bavaria and getting there can be an adventure in itself.

From where we were staying in Garmisch-Partenkirchen it was only 64 km to Hohenschwangau. Without a car and with no train line between the two towns the only way to get there was on the local bus. The bus stop was opposite the train station and right on time, as is the way with public transport in Germany, the bus pulled up and the driver greeted us like old friends. We set off on our journey but we didn’t get far before there was an unscheduled stop. The driver had seen a girl he knew and they had a friendly chat. My five years of German language study at high school might have been a distant memory, but I understood enough to know that the girl had bought a new bike and the driver was full of admiration for it.

After a few minutes we were underway again, travelling through tiny villages and mountain passes. We drove through Oberammergau, home of the famous Passion Play, and Unterammergau. We crossed over a gorge through which a mountain river rushed in a torrent of white foam and passed Bannwaldsee, one of many alpine lakes. We passed by the Wieskirche, or Pilgrimage Church of Wies, en route. This time we could only take a photo from the bus.

After two hours of scenic travel we arrived in Hohenschwangau. Our bus driver gave us instructions to be back at the bus stop by 5.13 pm for the last bus of the day and reminded us that it was a long walk back to Garmisch-Partenkirchen.

We had read that up to 6000 visitors a day visit the castles here in the Summer – it seemed as if they were all in the queue for tickets. The only way to see the castles is by guided tour and tour times are allocated when tickets are bought. Make sure you are at the entrance to each castle at the allotted time – numbers are limited – miss your tour and you miss out! 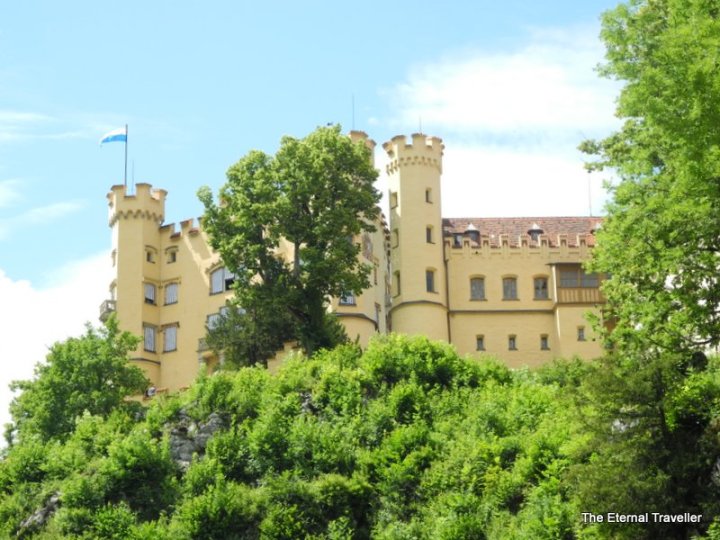 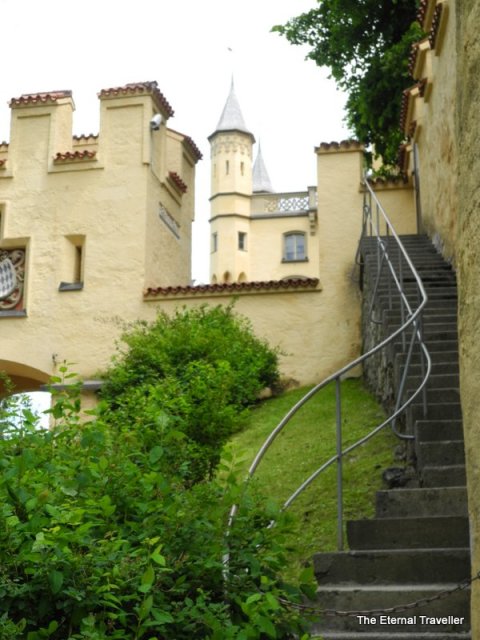 There were two ways to get there on foot; by a stairway that climbs steeply up the hill, or a longer but less steep walk along the road past the serene Alpsee and through the forest. On the lake we saw a swan – heraldic symbol of Ludwig’s family. Ludwig is sometimes known as “the Swan King”. 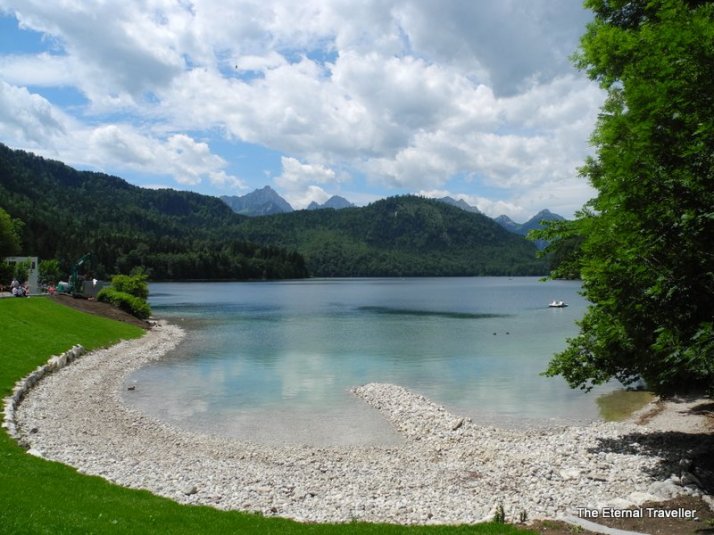 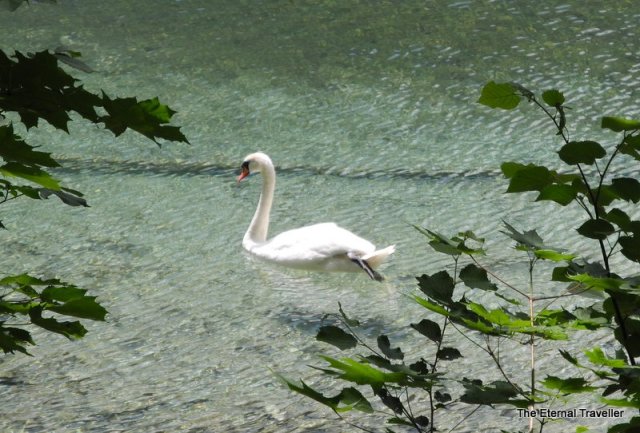 We came across a family watching a snake. The father assured us that it wasn’t poisonous, but a snake is a snake, and we didn’t stay long.

After touring the interior of the castle our descent from Hohenschwangau via the steps was quick and to reach Neuschwanstein in time for our second tour we had to start walking straight away.  Tourists can take a horse carriage or a bus to the castle entrance but the queues for both were long and the picturesque thirty minute walk through the forest beckoned.

We detoured to Marienbrücke, a bridge which spans the Pӧllat Gorge and gives the best views of the castle.

Neuschwanstein Castle was built on the ruins of two medieval castles. It was commissioned by King Ludwig II and construction began in 1869. When he died in 1886 only 40% of the castle was completed and the rest was never finished. The rooms that were completed were lavishly decorated and dedicated to the works of Richard Wagner, who was one of Ludwig’s closest friends.

We took a shortcut on a forest track on our walk back to the village and the bus stop, just to be sure we would be there before 5.13. After the heat of the day it was cool and refreshing in the shade of these majestic trees. Again our bus arrived on time and we left Hohenschwangau and its beautiful castles behind. After all that walking it was nice to sit and relax on the drive back to Garmisch-Partenkirchen and for most of the way we were the only passengers so the return journey only took 90 minutes. And what was the cost of this day of adventure on board the local buses? The princely sum of €18. Even King Ludwig would have been pleased with that.

18 thoughts on “A Bus Trip Through Bavaria”